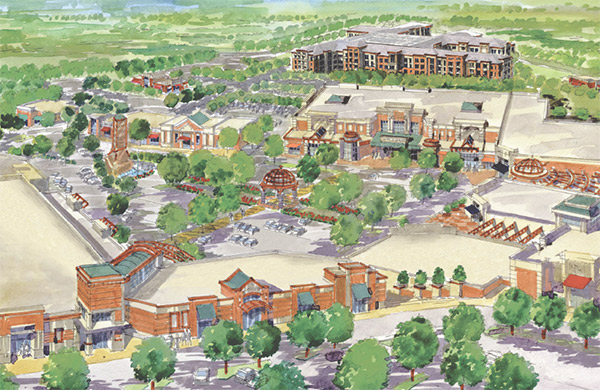 Previously a shopping mecca for the area, Granite Run Mall is long past its sell-by date, making the new mixed-development project a much-needed step toward revitalization, writes Leslie Krowchenko for the Daily Local News.

The new development by BET Investments of Horsham includes shops, restaurants, and entertainment venues. It also features a medical office building and apartments and is augmented by the existing department stores and supermarket.

“This will be a huge facelift,” said a township resident and the chairperson of council, Mark Kirchgasser. “For us, this is the beginning of something that has been needing rehabilitation since the late ’90s.”

The Granite Run development will reduce the one-million-square-foot property to around 820,000 square feet. Close to 350,000 square feet of this will be devoted to retail, with an open courtyard that will be surrounded by higher-end stores and restaurants creating a bridge between existing tenants Boscov’s and Sears.

The second floor will be occupied by a Frank Theatre Cinebowl & Grille, which combines multiple screens, bowling, and the restaurant.

Tenants for the storefronts will be announced in the spring. Some retailers will be opening their doors later this year, with others expected to debut in the first quarter of 2018.

Read more about the new development in the Daily Local News by clicking here.