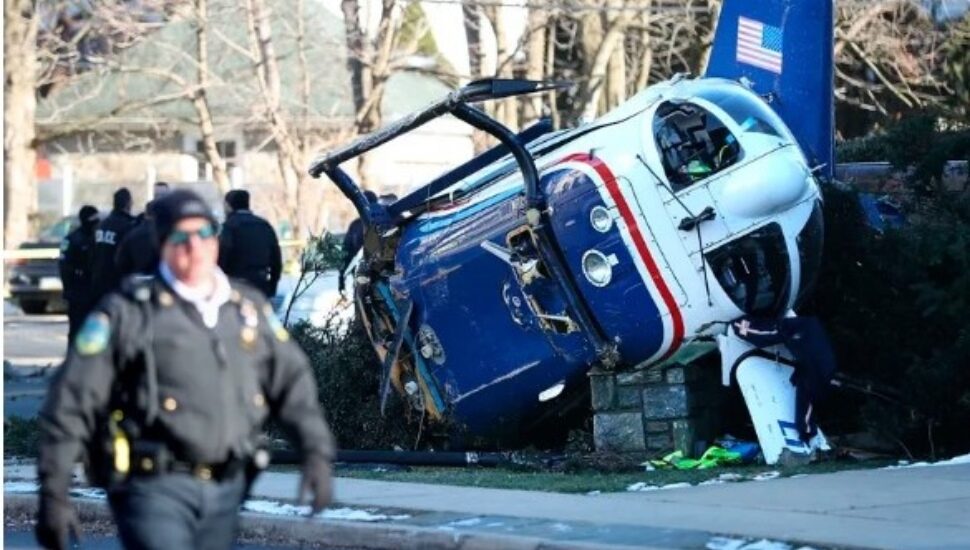 Image via Monica Herndon, The Philadelphia Inquirer.
A medical helicopter rests on the property of Drexel Hill United Methodist Church.

The word “miracle” showed up a lot in stories worldwide on the landing.

The Daily Mail out of the United Kingdom quoted a Tweet from State Rep. Mike Zabel, (D-163rd), who tweeted, “An absolute miracle in Drexel Hill today.”

A heroic quick-thinking helicopter pilot successfully navigated a damaged medivac helicopter to the ground at 12:56 p.m.

He avoided wires, trees, houses, vehicles and people as the helicopter impacted Burmont Road, sliding to a stop a foot or two away from the side of the Drexel Hill United Methodist Church building at Burmont Road and Bloomfield Avenue.

The only immediate casualty, aside from the helicopter itself, was a cleaved stop sign hit on the way down.

There were no fatalities, no life-threatening injuries and no significant damage to buildings.

This miracle story spread far and wide amidst a mostly negative daily news cycle. A Google search uncovered 32 separate posted stories about the landing and social media has been buzzing with conversations.

The helicopter apparently experienced mechanical trouble over Route 1 and the pilot was looking for a place to land, reports Delaware County Council Chairman Dr. Monica Taylor in comments to CBS 3.

“From all accounts, what the pilot was able to do is amazing,” she said.

“This is something pilots and crews are trained to deal with and they train regularly for things like this. This is exactly why we do it,” paramedic Jim McCans told the Daily Times. McCans is a flight paramedic with PennStar medivac in Philadelphia.

The pilot, a medic, a nurse, and a two-month-old infant were inside the EC 135 LifeNet medivac helicopter. Dispatched out of Hagerstown, Md., it was transporting the infant from WellSpan Chambersburg Hospital in Chambersburg, PA to Children’s Hospital of Philadelphia. It had lifted off from Chambersburg 45 minutes before the controlled landing in Drexel Hill, according to MSN.

Residents say they saw the helicopter struggling to stay aloft.  Fox 29 reported that surveillance footage showed the helicopter “sputtering across the sky.”

Nearby neighbor Lisa Smith told 6abc the pilot tried to come down, then went back up, possibly to avoid power lines.

Joshua James of Lansdowne described the helicopter descending like something out of Game of Thrones, ‘’you see a dragon coming at your car because it was literally in the sky, a huge object coming toward you. It was insane.”

6abc reported the aircraft “fluttered, hit the street and slid into bushes outside a church.”

Emma Gay, an Upper Darby High School senior, told 6abc she was in a Lyft driving by and heard a big boom, then saw glass and flaming debris on the road.

“Then there was a helicopter and part of it was on fire,” she said. She stopped to try and help, along with other neighbors and passersby.

Following the landing, three crew members and the infant were able to escape the downed helicopter.

“These guys started coming out of it and they’re like, ‘Someone come help us, there’s someone trapped underneath.’” Gay told 6abc.

The pilot helped the nurse that had the baby get out, then handed the baby to Gay’s Lyft driver while Gay talked with the pilot.

Parts of Burmont Road have been blocked off since the landing. Authorities expect the helicopter to be removed today.

The FAA and the NTSB are investigating the accident. Safety systems on the helicopter—belts and helmets, all worked and were secured.

A detailed account of the landing can be found in the Philadelphia Inquirer.

Here’s an Eyewitness News video with the latest on the helicopter controlled landing investigation by the NTSB.

The Skies Beckoned for This Newtown Square Pilot, and a Disability Wasn't Going to Stop Him