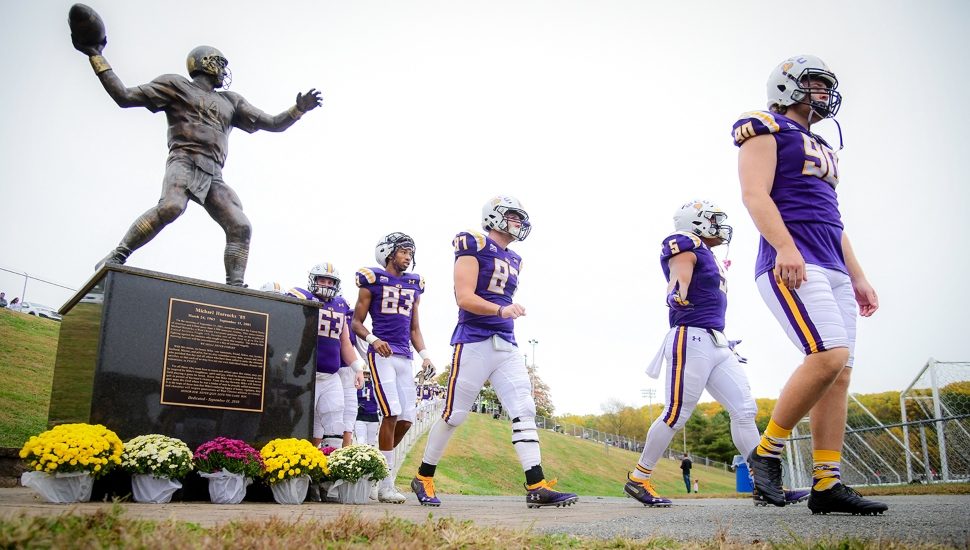 The Air Line Pilots Association, International (ALPA) — the largest pilot union in the world and a champion of all aspects of aviation safety — will present a $50,000 gift to West Chester University for the Michael Horrocks Football Scholarship Endowment Fund.

Joseph Genovese, Vice President of Finance-Treasurer of ALPA, will present a check to WCU President Christopher Fiorentino on Saturday, Oct. 16 during halftime of the Golden Rams’ 12 PM football game against East Stroudsburg.

On Sept. 11, 2001, Horrocks, a former WCU quarterback and member of the Class of 1985, was the co-pilot of the United Airlines Flight 175 that crashed into the South Tower of the World Trade Center. The Michael Horrocks Football Scholarship was established in 2012 and a bronze statue of him stands in WCU’s Farrell Stadium. The scholarship is awarded annually to a standout football player by coach Bill Zwaan and athletic director Terence Beattie.

Since its inception, the renewable scholarship has awarded $21,225 to four student-athletes. This year’s scholarship recipient is Gabrial A. Schappell, a senior wide receiver from Reading.

“The Air Line Pilots Association, International is proud to provide this support to the Michael Horrocks Football Scholarship Endowment Fund,” Genovese said. “As we commemorate 20 years since 9/11, it is important that we continue to honor our fallen heroes, who were also our beloved colleagues and friends, by ensuring that their contributions to our profession are never forgotten.”

After graduation, Horrocks served as an officer in the U.S. Marines as a pilot and later as a flight instructor. After retiring from the military, Horrocks became a pilot for United Airlines.

WCU Prof Testifies During Redistricting Trial: ‘This Is a Gerrymandered Map’