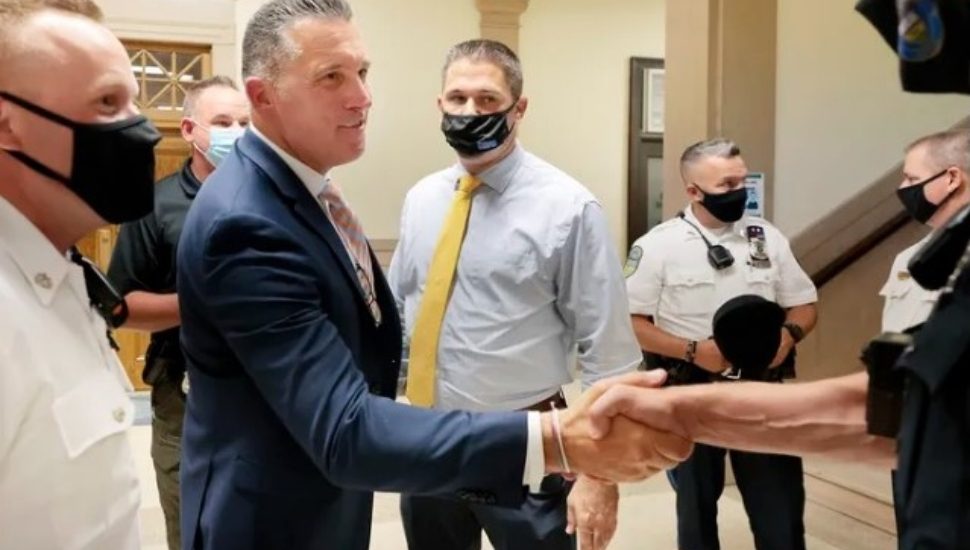 IMage via Elizabeth Robertson, The Philadelphia Inquirer.
Upper Darby Police Superintendent Timothy Bernhardt (second from left) is greeted by members of law enforcement at his swearing in.

Timothy Bernhardt, 49, was sworn in on Sept. 22 as Upper Darby’s new police superintendent, writes Vinny Vella for The Philadelphia Inquirer.

Under his leadership, the Upper Darby Police Department will take a community-driven approach to policing.

“It’s about building a trust in the community with the police,” Berhardt said. “The days of just going out there, shaking a tree, and letting courts figure it out are over. That’s not policing, and that’s not how we move forward.”

Bernhardt has already taken steps to change the department.  Tasers are now offered an alternative to guns and the use of deadly force.  A military tactical vehicle is no longer being used.

Body-worn cameras are coming in the next few months.  De-escalation and racial-sensitivity training are now included in officer instructions.

The department just recruited the most diverse group of officers in its history.

A victim advocate has been hired to help crime victims.

Bernhardt’s pushing to get federal accreditation for the department and he’s working to bring back the Police Athletic League.