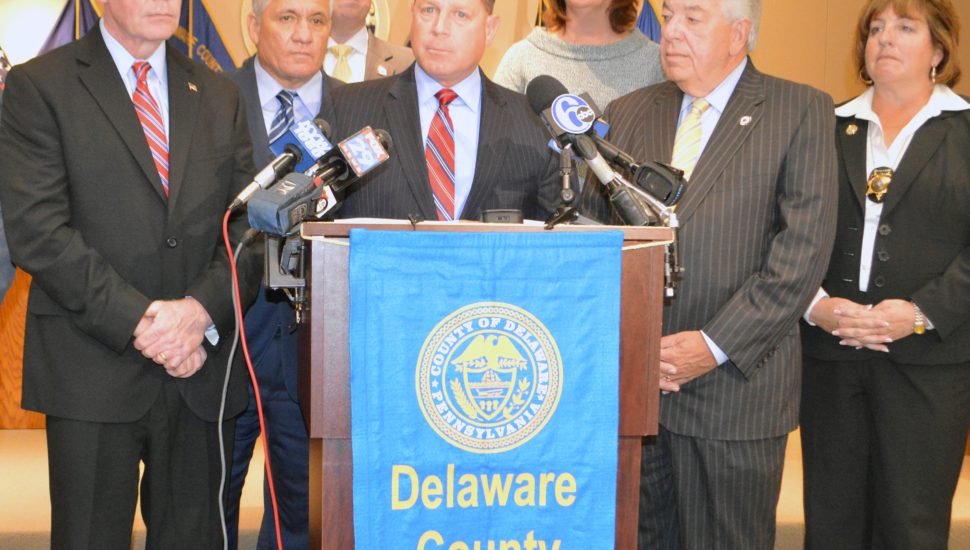 Delaware County, Pennsylvania’s fifth largest county, has declared war on opioid addiction by becoming the first county in the state to sue for damages against 11 major drug suppliers of opioids and their consulting physicians.

“Today, we are sending a message to the big pharma companies named in this lawsuit that Delaware County will not tolerate their well-documented, abusive opioid sales and marketing tactics that are systematically turning patients – including our fellow citizens – into addicts and then fatalities,” said Councilman Dave White.

Whelan, who co-chairs the Heroin Task Force with White, said, “We will fight this national epidemic of senseless death and destruction with civil litigation, and that is why the top makers of prescription pain-killer opioids are named as defendants, along with the doctors who helped them unleash their outrageous, illegal business practices that put profits – calculated in the billions – over public safety.”

Trial attorney Robert J. Mongeluzzi – of Saltz, Mongeluzzi, Barrett & Bendesky, the firm leading the plaintiff’s legal team – said, “We are honored to represent Delaware County as it undertakes this courageous litigation to hold the suppliers of deadly opioids responsible for their conduct, and hold them accountable in the monetary terms they completely understand.

“Money motivates their every deceitful action, and we plan to demonstrate at trial that their actions have been cold and calculated, and we will hold them accountable to appropriately compensate Delaware County – on behalf of its citizens – for the harm they’ve inflicted and continue to inflict through their business practices.”

White, noting that Delaware County is the county’s third-largest employer (with nearly 3,000 employees), stated, “We were the first county to recognize the need to equip police and first responders with Narcan, and that action saved and is saving lives.

“But this lawsuit demonstrates that we have to get to the source, and that doesn’t just mean the street dealer, but the big pharma suppliers of opioids that have either skirted the law or thumbed their noses at multimillion-dollar fines. Enough is enough. Unlike those companies, the county does not have deep pockets, and we recognize that our costs – including rehabilitation services – is skyrocketing.”

Thus far in 2017, Delaware County has had 167 drug-related deaths, with 145 of those deaths being opioid-related. The CDC estimates that 89 people die every day from an opioid-related overdose in the U.S., and Pennsylvania is among the highest-incidence areas for opioid-related abuse and overdose.

Harris L. Pogust – of Pogust Braslow & Millrood, LLC, who will serve as co-counsel in the litigation – also commended the county for taking the lead among the state’s 67 counties in filing the complaint.

“Officials here are acutely aware that the opioid crisis every year is costing the county lives – more than 100 so far just this year – and millions of dollars in economic impact in virtually every area of the government,” he said. “None of its 49 municipalities is immune from this catastrophe that has become synonymous with the defendants’ conduct in this action.”

Those defendants, including the three physicians who are referred to as Known Opinion Leaders (KOLs), in the lawsuit are:

Co-counsel in the litigation includes the highly acclaimed national firm of Simmons Hadly Conroy, which has frequently collaborated with SMBB and PBM on major mass tort litigation.