No Turbulence After First Phase of Airport's $30 Million Renovation 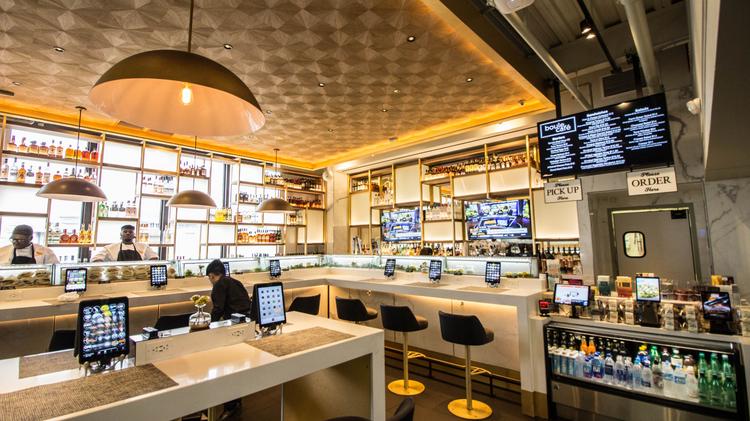 There’s been no turbulence on the way to finishing one of three phases in Philadelphia International Airport’s $30 million renovation of Terminal B. Image of Boule Café at Terminal B via Kenneth Hilario, Philadelphia Business Journal.

Philadelphia International Airport officials have been eager to check in on the now one-third-done Terminal B renovation, and that trip recently came without any turbulence.

The $30 million creative reimagining of the airport’s American Airlines hub is welcoming eight new restaurants and gate lounges equipped with iPads, according to a Philadelphia Business Journal report by Kenneth Hilario.

“You have to see it to believe it,” said PHL Chief Revenue Officer Jim Tyrrell. “It has really transformed, and it’s achieved our goal of transforming the customer experience. It’s like no other airport transformation.”

The work was done in collaboration with American Airlines and hospitality provider OTG, and it’s still on schedule to finish late in 2018. Next up are the phase two updates to hold rooms and new furniture, then a concourse overhaul.

The $30 million is also part of a larger $900 million long-term plan led by American Airlines to create the “airport of the future.”

“It will not only be the airport’s nicest and best front-of-the-house terminal, but the automation and the facilities that American will have there will be the most modern for American Airlines as well,” said AA Vice President of Hub Operations Olympia Colasante.

Read more about the status of the major renovation project in the Philadelphia Business Journal here, and check out previous DELCO Today coverage of the airport here.