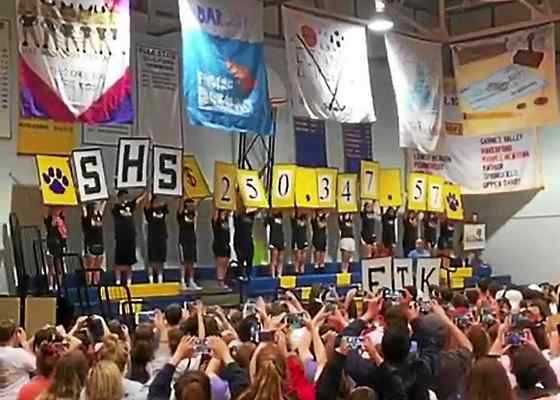 Honoring the memory of a beloved teacher for the 15th year in a row, students at Springfield High School held the Steve Stefani Dance Marathon to raise funds for the Four Diamonds Fund at Hershey Medical Center, writes Susan L. Serbin for the Daily Times.

Named THON, the event is sometimes referred to as mini-THON, part of a similar, larger event held at Penn State. However, the Springfield event is anything but mini, having generated more than $1.8 million since its inception.

This year, several months of preparation culminated in 15 hours of dancing and games by more than 700 students, bringing in just over $250,000 for pediatric cancer research and care.

Seventeen students, 15 seniors and two juniors made up the leadership team, with Emily Barber acting as chairperson. Several students took on the role of captain in categories such as technology, merchandizing, communication, and dance. They were also guided by John Gildea, the faculty advisor for the event.

“This is about being part of something bigger than yourself,” said technology captain Brooklyn Vaughan. “All the work and fundraising can be one step closer to finding a cure for pediatric cancer.”

Read more about the Springfield High School fundraiser in the Daily Times by clicking here.