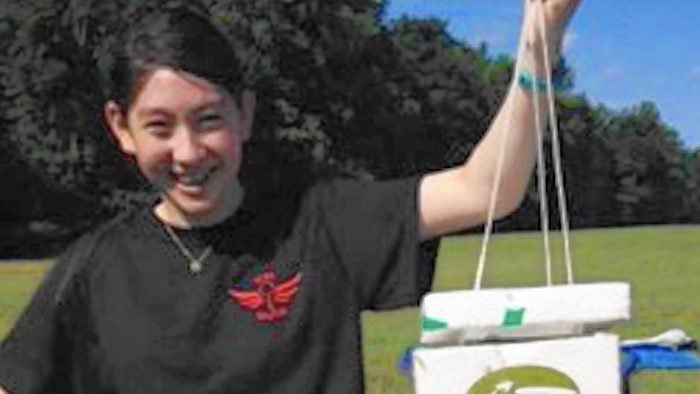 Abigail Kanes holds a STEM data pack attached to a helium balloon she and two other students launched in mid-June. Photo courtesy of Steve DiNardo.

Three middle school girls from Swarthmore are looking to the public for help in finding a data pack from a STEM balloon launched last month for a school project, writes Allan Vought for The Baltimore Sun.

Abby DiNardo, Julian Durian, and Abigail Kanes launched the balloon on June 19 from Ephrata in Lancaster County, and followed the balloon by radio telemetry to an altitude of 110,500 feet.

The path of a STEM project balloon launched by three Swarthmore middle school girls whose payload fell to earth near the Harford and York counties border last month.

At that point the balloon burst and the data pack floated to the ground with a small red-and-blue parachute.

The girls were able to follow its descent to 2,500 feet, when contact was lost in the vicinity of McDermott and Buckwheat roads in York County, just under a mile from the border with Harford County.

He added that he can be reached at 610-304-4259 or via e-mail at sdinardo1118@gmail.com by anyone with information regarding the data pack.

Read more about the missing data pack at The Baltimore Sun by clicking here.