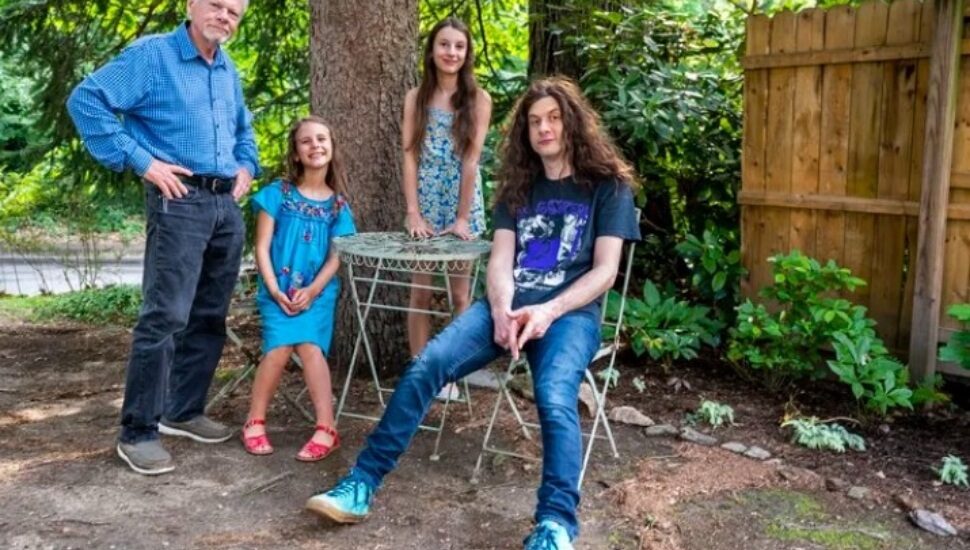 Image via Tom Gralish, The Philadelphia Inquirer.
Kurt Vile with his father, Charlie, and his daughters Delphine (left) and Awilda,

The cover shows Vile sitting on a footbridge, wearing a crocodile mask with daughter Delphine, 10, and her sister, Awilda, 12, nearby.

Inside album photos feature the 42-year-old unmasked, again with his daughters.

The girls can also be seen in a Team Joe Sings video Vile recorded in 2020 for the Biden campaign. Delphine is playing drums on Neil Young’s “Heart of Gold” while Awilda took lead vocals on Gillian Welch’s “Wayside/Back in Time.”

“They animate my world,” Vile says.

The album also pays tribute to Vile’s father, Charlie Vile, who retired in 2010 after 27 years as a SEPTA train operator. The song “Flyin (like a fast train)” features Vile in an empty train car and walking SEPTA tracks.

He just wrapped up a tour for the album this month and last week appeared on The Late Show With Stephen Colbert covering his late friend John Pine’s “How Lucky”.

Read more at The Philadelphia Inquirer about Kurt Vile and his desire to be a stay-at-home rock dad.

Here’s the Kurt Vile video “Flyin’ (Like a Fast Train)”.