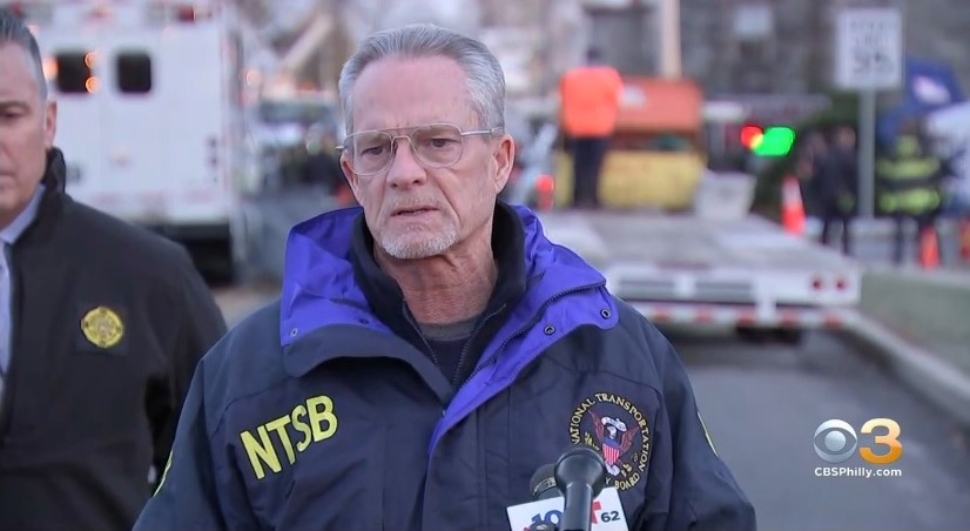 Image via CBS 3.
NTSB investigator Brian Rayner speaks at the scene of a helicopter crash in Drexel Hill.

“We’re just going to document the cockpit, the switchology, all those things here—the major components as found,” said NTSB senior air safety investigator Brian Rayner who was at the scene. “There are components on board that contain valuable data that we hope to capture and download.”

The helicopter was transporting a two-month-old infant girl from WellSpan Chambers Hospital to Children’s Hospital of Philadelphia. Trouble began over Route 1 and the pilot looked for a safe place to land, eventually coming down at the church.

The NTSB said the pilot suffered serious injuries but that none of the other three occupants, including the infant, were injured.  The infant was taken to CHOP by ambulance after the crash.

An unidentified man at the scene of the crash who was on the phone with a 911 dispatcher said he was most concerned about the infant girl and asked for an ambulance to transport her, according to a clip of a 911 call at the crash site released Thursday by Delaware County.

The dispatcher told him an ambulance had already been sent.

The man told the dispatcher that everyone on board the helicopter was conscious.

The National Transportation Safety Board visited the pilot Wednesday, but his medical condition prevented an interview from taking place. The pilot is expected to recover.

The wrecked helicopter was removed from the church property Wednesday evening and placed on a flatbed that left just before 7:30 p.m. en route to Delaware, where investigators will start figuring out what happened that brought the helicopter down.

The NTSB will be analyzing the electric components on the medivac and will be in touch with U.S. and foreign companies familiar with the chopper.

Officials from the FAA, NTSB, and the manufacturer will also look at weather reports and air traffic communication, reports the CBS 3 staff.

“An experienced investigator with technical expertise should be able to find one or two pieces that may have caused the crash and then investigate that,” aviation expert John Gagliano said.

Investigators say all evidence so far points to an accident, according to the WGAL report.

“Route 1 is only a mile from the church so if a helicopter is going 100 miles an hour that doesn’t give the pilot much time,” Gagliano said.

Fox 29 talked with the pilot’s father in this Jan. 12 news broadcast.

Making Way for Air Force One, New Garden Flying Field Cools Its Heels on Standby as Revenue Soars Away