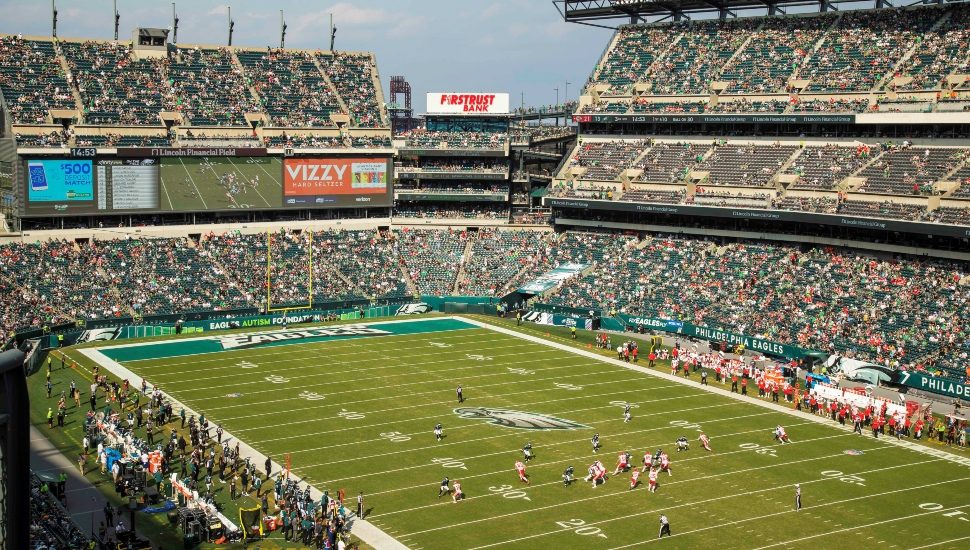 But does anyone have a clear idea of what that means?

And the comfort the players have in knowing they are in these good hands for financial services and dental care eases their minds for more important tasks.

As a financial institution that has been soaring in the Philadelphia area for more than 87 years, an Eagles-Firstrust partnership was a natural. It’s a premier bank aside a premier sports team.

In fact, they both got off the ground around the same time.

Firstrust Bank started in South Philadelphia in 1934, just a year after the Philadelphia Yellow Jackets went bankrupt and made way for the Eagles.

The bank and the team evolved with a shared history reflective of common values: endurance, grit, agility. They both saw difficulties that had to be shaken off (the Depression and Recession for the bank, the late 1960s slumps and multiple Super Bowl losses for the Eagles).

The alignment of the two entities’ market presence — high-touch with locals, a commitment to charitable causes, an interest in seeing the region succeed as a whole — made for an easy decision by Richard J. Green, Firstrust Bank chairman and CEO, to solidify the relationship.

The partnership with Firstrust means plenty of signage at Lincoln Financial Field, including the Firstrust Bank Touchdown Terrace, situated just below a huge presentation of the bank’s logo atop the stadium.

The spot has been outfitted with extras to turn merely watching the game into an experience. The backbar shows Firstrust branding and fun graphics decorate the interior.

During games, the bank sponsors a Red Zone Feature designation, signaling the crowd to get even more raucous in anticipation of a score.

Also, its “Take It to the House” promotion celebrates an Eagles return of a punt or kickoff for a home-game touchdown. One lucky winner will remember this TD for quite a while: His or her mortgage will be paid off, up to $150,000.

This potentially life-changing boost to a fan’s finances is admittedly rare, but according to bank sources, it happens more than people think.

Beyond the Game-Day Experience

For die-hard Eagles supporters who want to show an everyday appreciation for the team, Firstrust has several opportunities.

Fans can carry a co-branded Eagles debit card. They can also write checks just like the team does, on checks with that streaking eagle profile on them. And users of its online banking services can choose a theme of Eagles green/gray and white.

It’s a way of bringing football to users’ daily transactions.

Firstrust Bank does, however, have a serious side with its football relationship in Philadelphia.

The bank is true to its commitment to give back to the community through charitable drives, donations, fundraising sponsorships, and other outreaches. And the Eagles are legendary for their reputation in rolling up sleeves and pitching in locally.

As the official bank of the Philadelphia Eagles, it also handles the team’s day-to-day finances, runs payroll, and banks some its players and management; it has even had Eagles stop into branches for everyday needs.

Which understandably thrills the staff.

That kind of up-close and personal relationship with the Eagles clearly describes the services provided by Advanced Dental Esthetics.

He’s also the official dental-service provider to the Philadelphia Eagles.

He credits his achievement of that role to three factors he brought to the table: his credentials, his convenient locations, and his investments in dental technology.

And then there’s his fandom.

The Temple University grad fell in love with the team as a student and has been dyed-in-the-green loyal ever since.

Dr. Dudhat is in his first season as the source of players’ shining smiles.

And he spends a lot of time Sunday afternoons smiling himself, in attendance at all home games.

But despite the incredible vantage point for watching, Dr. Dudhat is in South Philadelphia to work. His onsite presence is to ensure quick responses in times of an oral injury to a player.

The most common, he says, are broken teeth.

In the melee of offense and defense, even with mouthguards and facemasks, a wayward elbow (or other hard body part) can accidently reach up and under a player’s protection.

Another danger results from the same kind of mishap to a player with an oral internal appliance like braces. In high impact situations, if brackets or wiring become damaged, they can release shards of metal to grind around jaws, gums, and cheeks.

Dr. Dudhat finds that his all-purpose approach to dentistry speeds things for players who must make an office visit.

When Eagles do come in, he says, other patients do notice (it’s hard not to, given their size). Some suspect it’s a football player but generally refrain from asking.

In his early days as the team’s dentist, he shot digital records of all their teeth. These electronic files are available at his numerous locations, meaning he can access a visual history quickly.

That enables him to diagnose and treat quickly, confidently, and conveniently. The extensiveness of his tech keeps players from having to make multiple appointments at various locations.

That maximization of players’ time can be a game-changer.

Dr. Dudhat knows that with these unique patients, the clock is almost always running.