With Decades of Experience, Hayden Printing Handles a Variety of Printing Needs 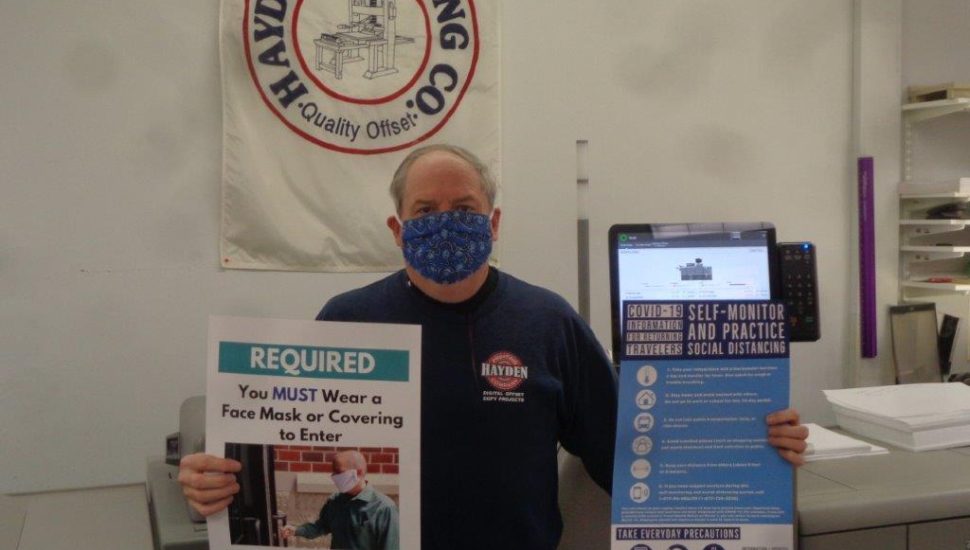 He’s the town’s fire chief, a firefighter in the proud tradition of his father, who served as the Lower Merion deputy fire chief.

“I started in printing when I was a young kid going to school in Ardmore,” he says.

There was a print shop up the street that needed help that was perfect for an eighth grader, from doing bindery work, to moving boxes around.

By high school, friends were asking him for some printing help. He bought some used printing machines, “which you could do back then,” and started doing printing jobs for friends and local businesses.

By the time he was 19 or 20 he had opened his own printing shop on Coulter Avenue.

By starting so young, he’s been able to get really good at what he does, growing his business with larger and better machines.

“I would buy machines, rig them myself, fix them up, run them for a while, then resell them and buy a better used machine, fix that up, run it for a while. That process went on for 20 to 25 years,” he says.

That’s meant a 60 percent drop in cost for some jobs.

“At one time we had two full and one part time driver just to send the proofs around. Now you do at all with computers,” he says.

Hayden Printing is a commercial printer that offers books, invitations, letterheads, brochures, menus, medical forms, all the way up to annual reports. Everything is done in-house.

Then there’s the millions of envelopes that get printed up through the year for mailings, fund drives, etc.

Hayden Printing has three locations; a warehouse and two print shops, one open to the public on Lancaster Avenue.

Hayden is quick to differentiate his business from the chain store copy and print shops and the larger print companies down by the airport.

“The bigger printer is just too big for somebody’s project and the smaller printer would struggle to bring the quality that would be desired,” he says.

It’s actually Hayden’s older equipment that gives them that personal edge over the chain store printers, he explains.

The pandemic has taken away a significant amount of print work (about 35 percent) centered around events and group gatherings so Tom Hayden has shifted gears.

“We were going great guns, then around March 13 the work just kind of shut off because businesses shut down.”

He compensated with more commercial lamination jobs and posters for places that needed to alert people about COVID-19, like schools and a bus company.

When you see signs reminding you where to sit, where to social distance, procedures for hand-washing, etc., think Hayden Printing.

“At one point we gave out thousands of posters to our neighbors in Ardmore for free. We just thought it was the least we can do. It sparked a lot of activity,” he says.

He credits his loyal customer base and strong Ardmore community ties with helping him keep the business going.

Hayden is a member of several civic groups, including the Main Line Chamber of Commerce, the Ardmore Rotary and the Ardmore Business Association.

“I really like being part of the business community. Even though we’re on the larger size of a small town, we really all know each other…,” he says.

In a crisis, like a pandemic, the businesses work as a team to help each other.

“It’s really nice to know everybody and have a talk with them and know you’re not the only one with these same challenges,” he says.

There’s also the community that’s formed from his firefighting work. He hires a lot of firefighters (volunteers and career firemen) at the print shop. Local businesses know that Hayden and some of his firefighting staff will occasionally have to drop what they’re doing to answer a fire call.

“We’d come back after every call and make sure business was on track,” Hayden says. “We work with the customers and they work with us because they know that I and some of the others are firemen.”

Hayden lives in Gladwyne and is actually a resident of Lower Merion, but he grew up in Ardmore. He’s been Ardmore’s fire chief for 21 years.

The pandemic has made it especially difficult for the firefighters. They spend a lot of time now disinfecting and decontaminating the firehouse and apparatus.

There’s also a strict mask policy and there are health safety protocols in place when responding to a building to make sure no one’s exposed.

Tom Hayden’s counting on the return of banquets and conventions to bring his business back 100 percent.

Find out more about Hayden Printing Company by clicking here.