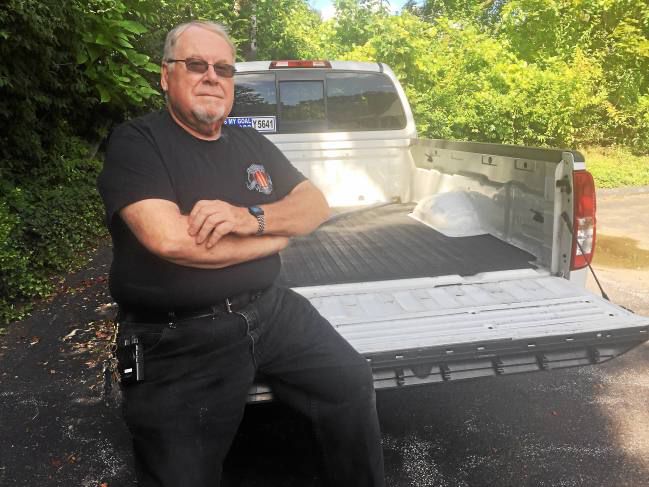 Middletown firefighter Don Wilkins commemorated the 343 firefighters who lost their lives on Sept. 11, 2001 with a memorial in his yard. Image via Peg DeGrassa, Daily Times.

Middletown firefighter Don Wilkins has built a beautiful memorial in his yard to commemorate his fallen brothers who died during the 9/11 terrorist attacks, writes Peg DeGrassa for the Daily Times.

Wilkins has served as a volunteer firefighter with the Rose Tree Fire Company for five decades. Once the fire company’s chief, he is now its chief engineer and is also a member of South Media and Middletown fire companies.

But Wilkins has never forgotten his heartbreak and horror as he watched 343 of his fellow firefighters lose their lives on that fateful day. The Delaware County fireman has been planning to build the monument for quite a while, but he wanted to make sure he took his time to do it right.

“I tried for years to get something, anything, from the Twin Towers to include in the memorial,” said Wilkins. “But private citizens were unable to retrieve anything from the site, so I did the next best thing and built a replica.”

The memorial is meant to remind people of the price paid by first responders that day, and Wilkins hopes that one day it will eventually be displayed in a more public venue.

Read more about Don Wilkins’s 9/11 memorial in the Daily Times by clicking here.