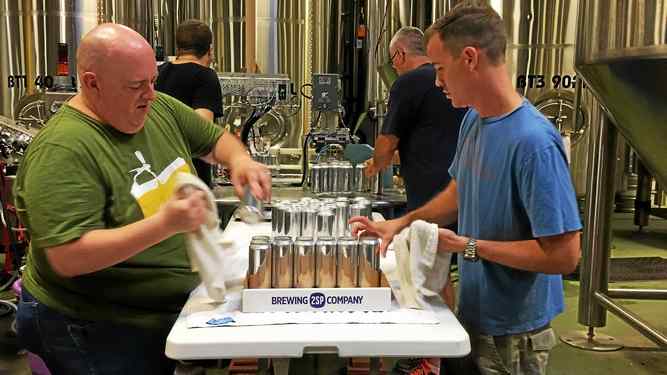 Turning 60 barrels of beer into 800 cases of cans every few weeks is a daunting task for a small independent brewery, but Aston’s 2SP Brewing Company has found the perfect way to achieve it, writes Vince Carey for the Daily Local News.

Ahead of transfer day, the Delaware County brewery places a post on its Facebook page asking for help from the community. Within an hour, every shift for the day gets filled, with more people on the waiting list in case somebody cannot make it.

“It’s like people want to live the dream without really going full time,” said Michael Contreras, director of sales and marketing for 2SP.

There was a special incentive for the latest round of canning, as the brewery was celebrating its second anniversary. The celebration included an all-day party at the Brewhouse on July 29.

This meant that there had to be enough of the 2nd Anniversary Ale for both the party and to go out to thirsty customers. Amazingly, despite the distraction, the team still fulfilled its quota by the end of the day.

Watch the video of the packing process from the Daily Local News by clicking here.