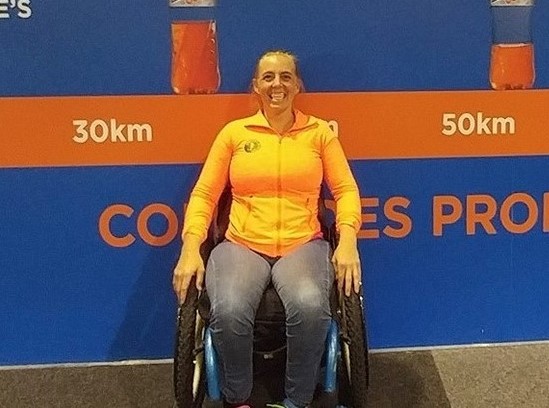 A Brookhaven resident and Pennsylvania State Trooper recently raced onto the scene of one of the world’s most prestigious ultra marathons, and became the first wheelchair athlete to finish its 56-mile course on her own power.

Jean Marie Altomari is only the third wheelchair-bound athlete to complete the 95-year-old Comrades Marathon in South Africa, and she’s the first to do it self-propelled, according to a Huffington Post report by Louis Bolling.

“Her athletic prowess, grit, and determination prove that achieving your goals is not determined by the limitations your body places on you but by the right mindset and the will to push through,” said The Chaeli Campaign CEO Zelda Mycroft. “Jean is an inspiration to all who see her in action.”

Initially unsure whether she would even be allowed to race, the state trooper who suffered a paralyzing spinal cord injury in 2010 finished the ultra marathon in 10:16:50.

“Jean is an unsung, elite athlete whose feat in completing the grueling Comrades Marathon proves that the inclusion of adaptive (wheelchair) athletes in ultra marathons is not only possible but an essential right,” Mycroft said.

Read more of Altomari’s journey and race experience on the Huffington Post here.