Delco Takes Its Heroin Task Force on the Road 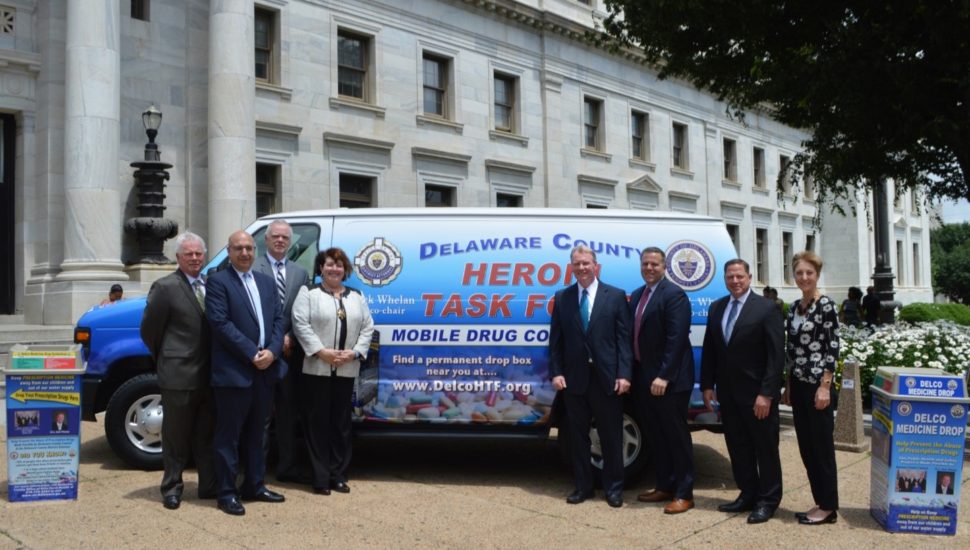 Delaware County Council, the District Attorney, and the Delaware County Heroin Task Force are taking their efforts to remove dangerous prescription drugs and combat heroin use on the road.

The CDC estimates that 89 people die every day from an opioid-related overdose in the U.S., and Pennsylvania is among the highest incidence areas for opioid-related abuse and overdose. This year, Delaware County has had 101 drug-related deaths, with 91 of those deaths being opioid-related.

“Since forming the Heroin Task Force in September 2012, we’ve learned about the drugs that lead to heroin use, particularly opioid pain relievers,” said White. “This new mobile collection provides another way to get unwanted medications out of our homes.”

Studies have shown that residential supplies of pharmaceutical controlled substances – those found in our home medicine cabinets – have become the supply of choice for young people and criminals. Many abusers, a high percentage of which are teens, are known to have obtained their controlled substances from the homes of family and friends.

These medications are effective when used properly, but many are highly addictive and dangerous when abused. Some individuals who misuse prescription medications, particularly teenagers, believe these substances are safer than illicit drugs because they are prescribed by a doctor or dentist, and dispensed by a pharmacist. Commonly abused medications include pain relievers such as OxyContin and Percocet.

“Prescription drugs are often the target of theft and misuse. We know that young people are becoming addicted to opioids by first taking a prescription drug which they get from medicine cabinets of their parents, their grandparents and friends,” said District Attorney Jack Whelan. “One way to prevent addiction is to offer convenient, secure and environmentally safe drug disposal programs to decrease the supply of unused prescription drugs in the home.”