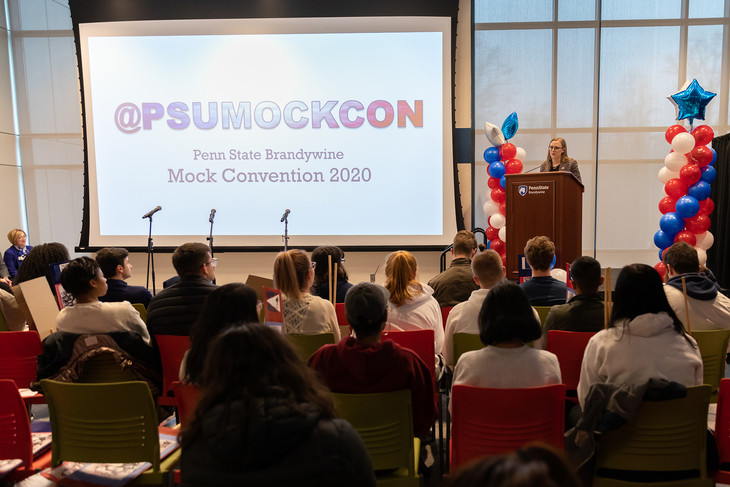 Pennsylvania State Rep. Jennifer O’Mara was one of several local elected officials to speak about the importance of civic engagement at Penn State Brandywine's mock convention. Image via Penn State.

Sure, right now there’s no clear front runner in the Democratic primary. But over at Penn State Brandywine, they’ve got former Vice President Joe Biden as the likely  Democratic nominee for president, according to a simulated nominating convention held there, reports news.psu.edu.

That result came after months of research by students, faculty and staff.

They were part of state delegations that researched what issues were important to each particular state. That determined how that state would likely vote in the Democratic primaries and at the National Convention.

At a Feb. 6 mock convention, representatives from each state announced which candidate they picked. Biden led the way.

Students in the Living in a Diverse World class created a display focused on voting rights.

“With both the mock convention and the centennial for the passage of the 19th amendment approaching in 2020, I wanted the students to focus on voting rights,” said Margaret Signorella, professor of psychology and women’s, gender and sexuality studies.