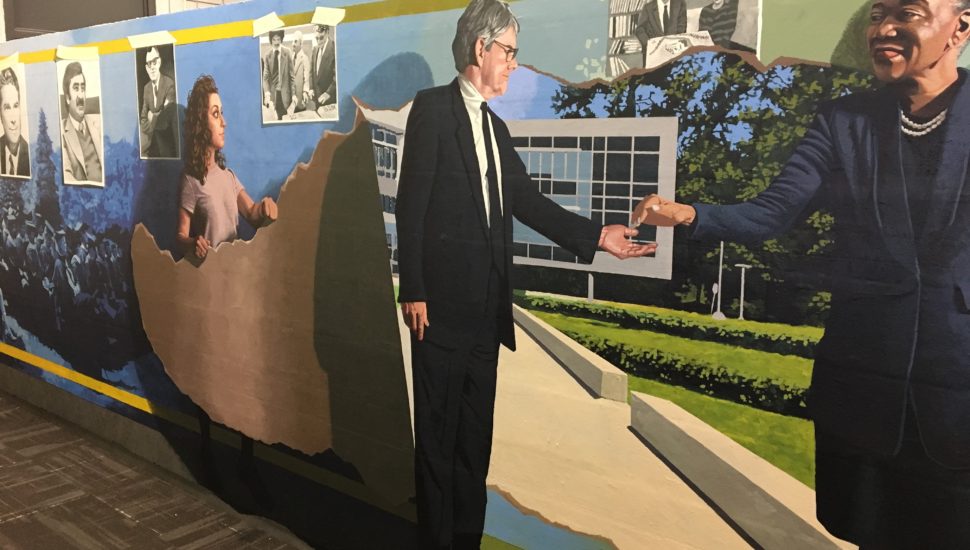 Dr. Jerry Parker – who recently retired after 40 years of service to Delaware County Community College – has officially handed the presidential reins to Dr. L. Joy Gates Black, only the fourth person to sit at the helm of the 50-year-old institution.

That changing of the guard is celebrated in a new mural in Founders Hall on the Marple Campus. Entitled “Half Century,” the mural depicts Parker, Gates Black, and the other presidents responsible for the growth and success of the college since its founding in 1967.

The painting was the result of a collaboration between professor Jon Laidacker and the students in his Mural Painting course.

“We were given the general directions to do something that celebrates the college’s 50th anniversary,” Laidacker said. “The class came up with the rest.”

Laidacker, who earned a Master of Fine Arts from the Pennsylvania Academy of the Fine Arts and who wrote his thesis on mural painting, has been teaching the course since the fall of 2014.

“It’s an open elective that isn’t restricted to art majors, and there are no prerequisites,” he said. “It’s a lecture/studio hybrid class. The first half, the students learn about art history and brainstorm ideas, and the second half, they get to work.”

Laidacker and his students were given the blank slate in Founders Hall, and the professor broke the mural down by sections, allowing each student to have his or her own space to work.

“It was like a giant paint-by-numbers,” Laidacker said. “And that made it a great learning tool.”

The students who participated in creating the mural are:

“Some extra work went into it in terms of refinement and details – in fact, I’m still working on touching it up – but the students did the heavy lifting,” said Laidacker. “It’s a piece of art they should be proud of.”