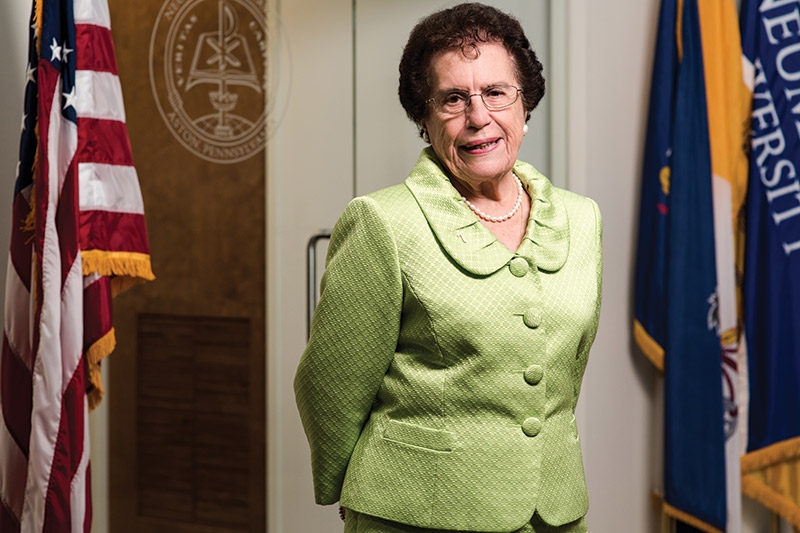 VISTA Today asks Dr. Rosalie Mirenda, President of Neumann University, about growing up in South Philadelphia the first daughter of Italian immigrants born in the United States; finding her way to Villanova University; a career in nursing; and eventually rising through the ranks to become president of Neumann in 1996, where she tripled enrollment and saw the university’s Delaware County footprint expand from 14 to 68 acres.

Where did you grow up, Dr. Mirenda?

I was the first in my family to be born in the United States. My father first came to this country in the late 20’s and then brought my mother and sister, seven and a half years older than I, over in 1931. Their small family settled in an Italian section of South Philadelphia where the parish, neighborhood, local grocery stores, and our relatives were the centers of our lives.

What did your father do?

While my dad loved creating things, he wasn’t the traditional artist or craftsman. Once he was settled, he started his own business manufacturing statuary using a material called GESSO. As he brought additional relatives over from Italy, he gave them work in the business. When he retired, the business, called Modern Tuscany Art, employed over 30 people and made statuary for just about every parish in the Philadelphia Archdiocese.

What memories do you have of growing up in South Philadelphia?

There was always a table with food and a lot of people around. Of course, as soon as the food was brought out, my father would open a home-made bottle of wine. There were a lot of open doors in our neighborhood. It wasn’t uncommon for our door to be unlocked and for a neighbor to pop in unannounced. I remember an overwhelming sense of community and knowing I would never be alone.

How did your parents’ immigration experience differ from what immigrants experience today?

Mom and dad intentionally came to the United States so their children, my sister and I, would have more opportunity. They never looked back. They found their community and a parish that supported them. I’m not sure those communities and parishes are there now to offer as much support as my parents experienced.

Did you work in your father’s business?

No, my older sister, from the time she was eight or nine, did though and eventually became dad’s bookkeeper. I helped my mother with the cooking and cleaning at home and didn’t have a “real” job outside the home until I was in college. Instead, about the time I turned twelve or thirteen, I discovered I enjoyed being a student.

Did you get involved in sports when you were growing up?

I rode my bike, jumped rope and roller-skated, but that’s it. Over time, first as a mother of young children and then in the collegiate setting, as I saw the positive influence sports could have on a young person’s life, I grew to love athletics. Seeing the lessons kids took away from their athletic experiences; the camaraderie and resilience, overcoming a difficult loss, the sense of achievement, all won me over.

Taken collectively, our student-athletes at Neumann have higher GPA’s, retain more of what they learn, and do better after graduation than students who aren’t involved in sports. My passion for sports as a venue for good is deep; my husband and I were honored to be inducted into Neumann’s Hall of Fame last year.

How did you decide to go to college?

In my community, at the time of my childhood, the thrust was to get a family’s sons into college. Many of my girlfriends with brothers at home never got to college. Two things happened that made it easy for me to attend college.

First, at the beginning of my senior year of high school, one of the Sisters at my high school, Sister Hyacinth, OSF, stopped me one day and insisted I take typing. I told her I was on the Science track and didn’t need typing. She insisted, one never said no to a Nun, and come January, I was in typing. Once I got in the class I asked her why she thought I needed typing. She told me I had to learn how to type because I would be typing a lot of papers in college.

The second event was my father’s reaction when I told him over dinner one night I wanted to go to Saint Agnes Hospital’s School of Nursing and become a nurse. He looked at me and told me that was the most ridiculous thing he had ever heard! ‘When you’re sick,’ he said, ‘you go to a hospital. When you want an education, you go to a university!’ I told Sister Hyacinth what my father had said, and she found Villanova University for me!

What did Sister Hyacinth, OSF see in you?

I was inquisitive. Once I got into something, I wanted to know more about it. I also had a good work ethic and stick-to-it-ness.

Did Villanova end up being a good choice for you?

It was! My dad was so proud of me. At the start of every semester, my father would get dressed up in a suit and tie, come with me to campus and pay my tuition with cash. The Dean of the School of Nursing, also a Franciscan Sister, got to know my father and helped me land my first job as a nurse at Saint Agnes Hospital after graduation.

How did you get from that first job to being President of Neumann University?

I was constantly being called to do more. It wasn’t always a promotion either. Sometimes it was an invitation to serve on a committee. If I was asked to serve, I couldn’t say no, and if I took on a responsibility, there was no way I wasn’t going to do it as well as I could.

In fact, that’s how I ended up in this position. In my early years as a faculty member, I was asked to serve on the long-range planning committee for the Our Lady of Angels College. Although I didn’t have a clue what serving on the committee entailed, I said yes. The assignment turned out to be a tremendous learning opportunity in that it gave me an opportunity to learn about every segment of the college and how all the pieces of the institution fit together.

When did you realize you had leadership capabilities, Dr. Mirenda?

I first saw it when I got involved in my children’s school Holy Child Academy in Drexel Hill and then Archmere Academy. I wanted to be the parent who was watching and paying attention to ensure my children had a good experience and took advantage of every opportunity that came their way.

Then, over time, I had several people here on campus who out of the clear blue took an interest in me. One, Dr. Hilda Feld who was an interim Academic Dean, got to know me and invited me to fill in for in for the chair of the Nursing Department who was out on an extended sick leave. How could I say no?

Several years later, I received a call from the then-president of the college to visit with her in her office. When I got to her office, she invited me to fill a soon-to-be vacant VP of Academic Affairs position for six months while the college conducted a national search for a permanent replacement. The search failed to turn up anyone the committee liked, and I was offered the position on a permanent basis.

Six years later in the Fall of 1995, I was the only VP invited to serve on the search committee to find a new president of the college. The committee had one meeting laying out the criteria it wanted in a new president. One week later, a former colleague called to tell me he was nominating me for the position. Then, a few days later, a previous president of the college called me to tell me she too was nominating me. Over a period of several months, the committee narrowed the field down from 38 to seven and then to one, me.

What are your priorities and challenges as you look to the rest of your time at Neumann?

To work with our Board and institution to pay attention to two things; First, our Catholic Franciscan Identity and how that identity gives direction to everything.

Second, I urge the Board to capitalize on the strengths we have built while working on building new strengths. Our health sciences program, for example, not only produces great graduates but enjoys a great reputation across the region. Another strength to sustain is the campus infrastructure wise, we own all our buildings, every position is fully funded, and our endowment sits at $30 million, up from $1.7 million 20 years ago.

What about you, what are you going to do after you retire this June?

My husband and I made a conscious decision not to make plans until I am officially retired. I want to retire gracefully and do all that I can do to make the transition as seamless as possible.

You’ll have more free time after you retire. How do you envision spending it?

Absolutely nothing! I’m retiring to retire! I have a wonderful family with five grandchildren with whom I want to spend more time. We don’t have to buy a house at the shore because my kids already have one!

That said, I have lost the art of reading a book, and I look forward to reading a wonderful novel from start to finish. I have a stack of books I want to read for the first time and a few, including Wuthering Heights, I want to read again.

What is the best piece of advice anyone ever gave you?

There are two. First, never burn bridges. The second has more depth to it than the practical application of never burning bridges. Whenever you meet someone or are asked to evaluate someone, always look for the good in the person.

For instance, on those rare occasions when we ask a student to leave campus, I try to get to know the student so I can remind him/her of something positive about them. There’s good in everyone; you just have to look for and find it sometimes.