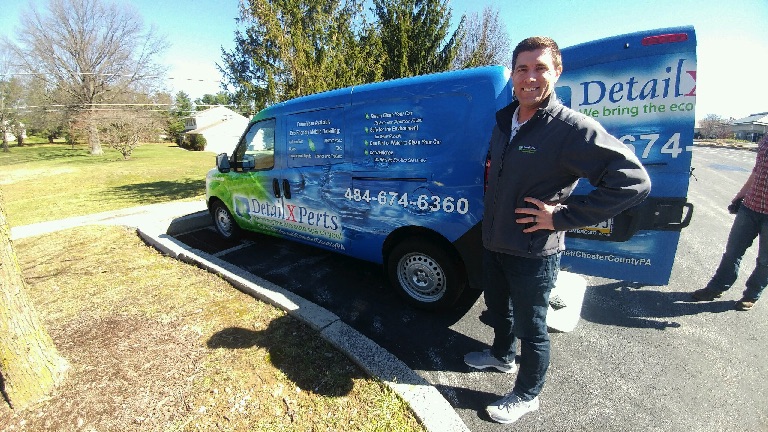 Tony Coyne, a former draft pick of the New York Mets, owns the area’s only DetailXPerts, a franchise that gives cars an eco-friendly spa treatment.

If Malvern resident Tony Coyne can detail a car as well as he can turn a double play, and his new business hits the ground running as swiftly as he used to leg out triples, the area’s streets will soon sparkle with more shiny vehicles than ever before.

The 38-year-old native of Huntingtown, Md., and former professional baseball player is the new owner of a DetailXPerts franchise, which specializes in giving cars an eco-friendly spa treatment, regardless of whether they’re parked in a driveway at home or a lot at work.

His territory encompasses Downingtown, Exton, West Chester, and Malvern, north up to Chester Springs, Phoenixville, and King of Prussia, and east to Frazer, Paoli, Berwyn, Devon, and Wayne. And his staff will come to you.

You don’t have to be an environmentalist to appreciate the manner in which DetailXPerts makes cars look as if they were just driven off the lot.

“We can clean the inside and outside of a vehicle with just one pint of water,” said Coyne. “There’s no runoff, no puddles, and every solution we use is biodegradable.”

By using steam, DetailXPerts’ cleaning system conserves precious natural resources, instead of the 40-80 gallons it takes to wash a vehicle in the traditional conveyor car wash. Only two gallons are necessary to wash 15 vehicles the DetailXPerts’ way.

Coyne’s belief in such a common-sense aspect of the business prompted him to invest in the franchise.

“I evaluated all types of business-ownership opportunities, and I was very interested in one that could grow to a large scale rather quickly,” he said. “I can honestly see all car washes being retrofitted with steam machines within the next several years.

“And if you’re one of our customers, you don’t have to worry about your property, and you don’t have to drop your car off and wait. The whole world is moving in that direction – people want things done on their terms.”

DetailXPerts’ prices range from $150-$275, a very competitive cost in the local detailing market. The difference is that Coyne’s team comes to you, wherever is most convenient. They don’t waste water, and you and your loved ones won’t be inhaling the toxic residues left behind by the harsh chemicals typically used by traditional detailers.

Coyne is a well-traveled business man whose journey began in the DMV – the D.C., Maryland, Virginia area. And not only did he once play baseball for a living, he possesses an Ivy League degree.

“I was drafted by the (New York) Mets in the 23rd round (of the 2000 draft) after my senior season at Yale, and signed for $500, or what I sometimes refer to as a ham sandwich,” said Coyne, an infielder.

Coyne played two years in the Mets’ minor-league system, then three years of independent ball in the Frontier League, where he batted better than .300.

When it came time to hang up his cleats, he interned for a year with the Kansas City Royals in baseball operations.

After that, he worked stints with Under Armour and Apple, before joining two former teammates from Yale who ran a startup real estate investment company. There, Coyne led the growth and development of the property management division, with 200 properties under management to more than 8,000 at the company’s peak.

But he always wanted to own a business, and a local franchise coach in Media – Bob Koch from The Entrepreneur’s Source – helped shepherd him through the process.

Now, Coyne is as determined as he’s ever been, having finally found something to match the passion he once had for baseball.

“My primary motivation is to build a great team of people who are committed to providing 100 percent satisfaction to every customer we work with, whether it’s a sales manager at a dealership, a road warrior who lives out of their car, or parents with two car seats and crumbs everywhere,” said Coyne.

“The hope is that, by focusing on consistently providing an amazing service on every vehicle we detail, my small business will grow into one where I can provide a lot of meaningful jobs and careers for hard-working, dedicated people.”

Click here for more information on DetailXPerts or to schedule an appointment.