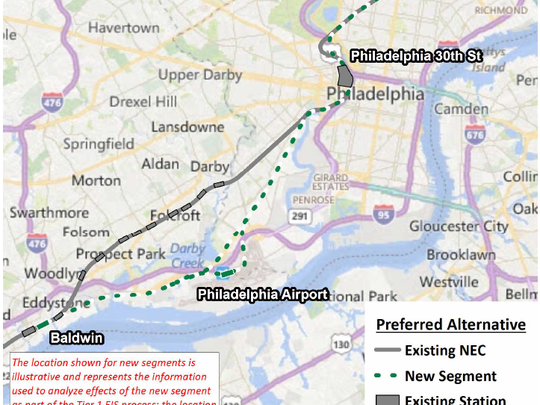 Courtesy of the Federal Railroad Administration.

The waiting list for passengers on a proposed train route with direct access to the Philadelphia International Airport is already starting to grow, even though the funding needed to build it is far from reality.

The Federal Railroad Administration has outlined the need for a new loop from the Eddystone Rail Station near Chester to the airport, and back to existing tracks in University City, according to a report for The Wilmington News Journal by Karl Baker.

“It would allow people in Wilmington to get on an Amtrak train and go straight to Philadelphia’s airport without having to go through Philadelphia’s 30th Street Station,” FRA spokesman Matthew Lehner said.

The proposal is just one small part of a massive, $120 billion plan for 30 years of general maintenance and expansion to four tracks along most of the Northeast Corridor, which runs from Boston to Washington, D.C.

But it’s a key part.

“One of the things that we know that we heard very loudly and very clearly from folks in the Wilmington and Philadelphia area is the need and the desire to have direct access to a major airport,” Lehner said.

Read more about the wide-reaching FRA plan and the next steps for funding such a project in The Wilmington News Journal here.