Did You Know? The Battle of Brandywine, America's First 9/11 Tragedy 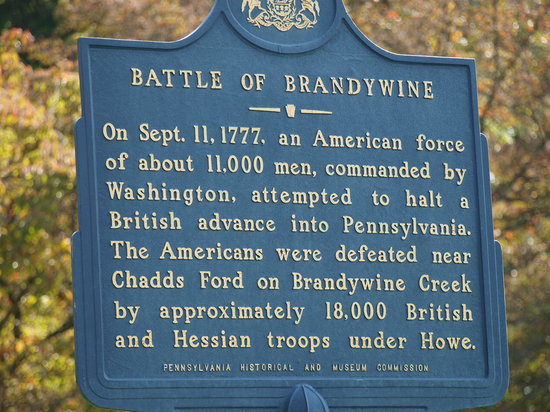 The Battle of Brandywine was fought between the American army of General George Washington and the British army of General Sir William Howe on September 11, 1777 near Chadds Ford.

Chadds Ford was important as it was the most direct passage across the Brandywine River on the road from Baltimore to Philadelphia.

More troops fought at Brandywine than any other battle of the American Revolution. It was also the longest single-day battle of the war, with continuous fighting for 11 hours.

(Have you voted for the Bradywine River to be named Pennsylvania’s 2017 River of the Year yet? Vote here!)

According to the Brandywine Battle Historical Site, superior tactics and better knowledge of the area allowed the British to outwit Washington and his army.

The British Army defeated the American Army and forced them to withdraw toward Philadelphia and eventually Valley Forge.

After the battle was over, British and American forces maneuvered around each other for the next several days with only a few encounters such as the Battle of Paoli ten days later. On 26 September 1777, British forces marched into Philadelphia unopposed.

No casualty numbers for the American army at Brandywine survives. The nearest thing to a hard figure from the American side was by Major General Nathanael Greene, who estimated Washington’s army had lost between 1,200 and 1,300 men.

The full description of the Revolutionary War battle fought on the banks of the Brandywine River can be found on Wikipedia.

The Brandywine River is a beautiful recreation and environmental sanctuary that deserves Pennsylvania’s 2017 River of the Year award!

You can help the Brandywine win that distinction by casting your vote now.