Nigerian Immigrant and Swarthmore Graduate Receiving Acclaim for Her Art 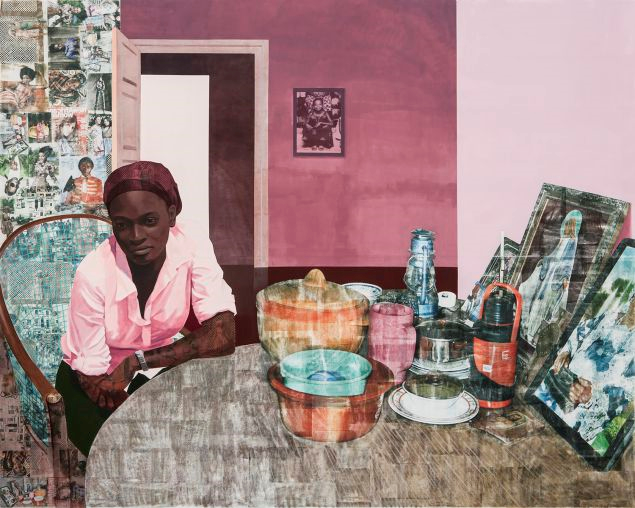 Njideka Akunyili Crosby, who immigrated to Swarthmore from Nigerian when she was 16 and later graduated from Swarthmore College, is receiving critical acclaim for her art.

The 32-year-old’s paintings tell subtle, complicated stories about her homeland, herself, and colonialism, writes Ryan Steadman of the Observer, a Manhattan-based weekly newspaper.

According to Steadman, Crosby came to America after winning a green-card lottery in her hometown of Enugu. She’s part of a growing Afropolitan contingency (a name sometimes used for Africans living around the globe) that is proving it has a much more nuanced view of African culture.

“Crosby’s artworks – luminous interiors teeming with eye-catching collage elements that offset delicately painted figures – while political, are very much about her day-to-day life,” wrote Steadman. “Her subjects include herself, family and friends caught in quiet moments like having afternoon tea, a prolonged hug or a slow dance.

“But imagery from Nigeria’s revolutionary history, portraits of brutal dictators and other remembrances from her homeland also stew within these constructed dramas, which evoke the lush quietude of the Post-Impressionist painter Pierre Bonnard’s century-old domesticities.”

After earning a Bachelor’s Degree from Swarthmore, Crosby, who relocated to Los Angeles a few years ago, completed four years of training at the highly-regarded Pennsylvania Academy of Fine Arts.

“Njideka Akunyili’s work tells a complicated story, both formally and with her use of narrative,” said Catherine Murphy, a highly decorated artist who spoke at Crosby’s Rosenthal Family Foundation Award presentation at the Academy of Arts and Letters in 2013. “The layering of information draws the viewer into worlds within worlds within worlds using a unifying contemporary language.

“Her paintings are a unique response to a situation that is both personal and global.”

Click here to read more about Crosby from the Observer.