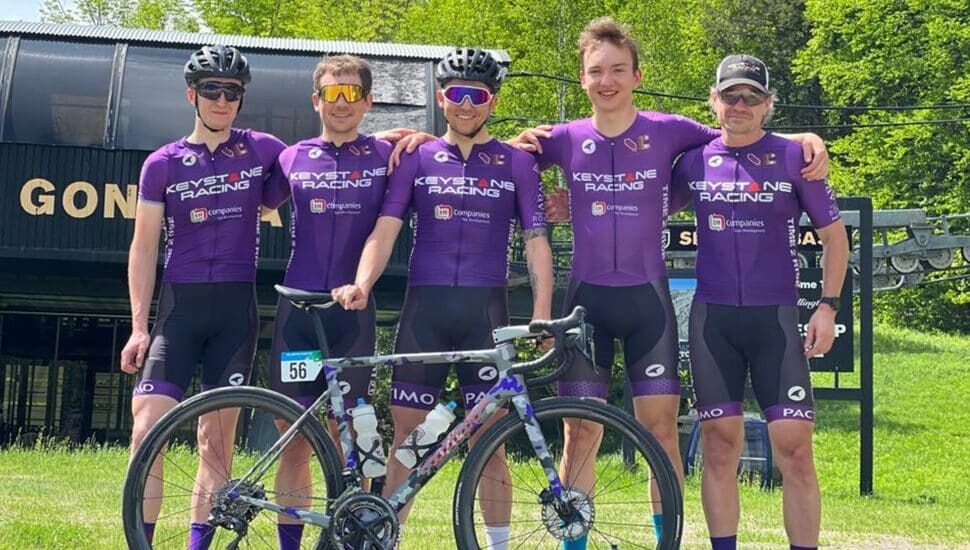 Image via Keystone Racing.
Keystone Racing provides support for elite cyclists who are balancing their training with school and part-time work.

Berks County native and accomplished cyclist Jeff Schaeffer has long been aware of the stress involved in elite-level racing. Not only has he been riding bikes for more than 20 years, but his son, 27-year-old Dakota Schaeffer, was once a professional in the sport.

Watching Dakota juggle his training with his college studies and part-time job prompted Jeff to form Keystone Racing in 2018. The goal was to provide support for cyclists who aspire to compete in national events while balancing their education.

“A typical elite cyclist trains 15-20 hours a week while often taking classes full time and working at least one job part time — that’s a lot of stress,” said Jeff. “The intention behind forming Keystone Racing was to allow cycling to become fun again, by taking the pressure and logistical stresses off these athletes.”

Six of Keystone Racing’s team members are elite cyclists who compete in approximately 100 combined races each season, which runs from March through October. Their entry fees, as well as food and travel expenses, are paid for by Keystone Racing. That makes finding sponsors to financially support the team imperative to its success.

“Before the formation of Keystone Racing, I was burned out and not reaching my potential,” said Dakota, who officially committed to the sport when he was 16 years old and excelled in the amateur ranks on a Lehigh Valley-based team coached by an Olympic medalist from Norway. “As a professional, I wasn’t enjoying the sport as much as I could’ve been. Once we formed Keystone, I immediately had my best year ever.”

This year, Keystone Racing’s cyclists will compete in road and gravel races throughout the Mid-Atlantic and Northeast regions and are looking for corporate and private sponsors.

Keystone Racing views sponsorship as a mutually beneficial partnership. Sponsor names and logos are featured prominently on all team kits, which are worn by riders and by the team’s fast-growing fanbase. This effectively creates a two-wheeled, visual marketing campaign for a company. From Virginia to Vermont, Keystone’s riders compete in a range of disciplines across many communities and social circles. Additionally, they use social media to responsibly highlight their sponsors and thank them for their generous support.

“Sponsorships mean the world to us,” said Dakota, who works as an Inside Sales Representative at Clean Earth, an environmental waste management company in King of Prussia. “We have a young team, with most of our members still in college, working part time and scraping by just to follow their passion. We’re very appreciative of any help we get.”