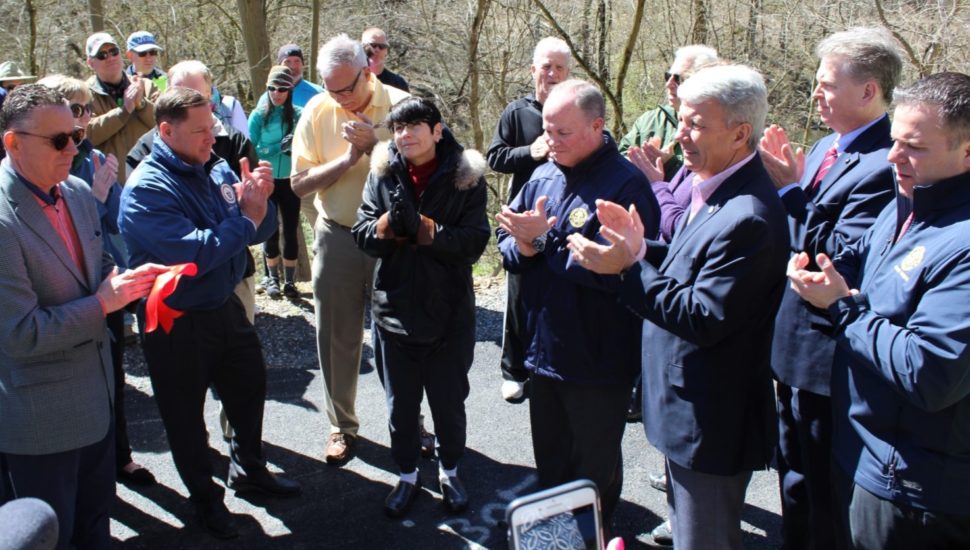 Delco Council joined recreationists across the nation to kick off the spring trail season and the Rails-to-Trails Conservancy's Opening Day for Trails.

Delaware County Council joined recreationists across the nation to kick off the spring trail season and the Rails-to-Trails Conservancy’s Opening Day for Trails by officially opening the largest county-owned trail to date at a ribbon-cutting ceremony Saturday in Middletown Township.

The ceremony took place near mile-marker 1.5, located adjacent to the Mills at Glen Riddle, one of Delaware County’s oldest mills, which has been converted into office space.

Spanning 2.8 miles along the Chester Creek, from Lenni Road to Chester Creek Road through Middletown and Aston townships, the tree-lined, fully-paved scenic trail offers elevated views of the creek for recreation and fitness. It also provides access to some of Delaware County’s earliest historical sites, including mills of the Industrial Revolution era.

As part of County Council’s Open Space and Greenway Plan, the trail will serve as a catalyst for tourism and economic development, creating and maintaining new business opportunities.

In addition to several road crossings and a trailhead with parking, the many years of inactivity of the rail lines led to the need for reconstruction and major rehabilitation of four bridges, construction of multiple culverts, and comprehensive streambank stabilization along the length of the trail.

Federal funding sources for the $6.6 million construction project were secured by County Council.

“As the result of many years of effort by Delaware County Council to preserve this stretch of green space, Delaware County walkers, hikers, bicyclists, and runners are now able to enjoy this beautiful creek-side trail, which has become one of the many gems of the county,” said Councilman Dave White.

White acknowledged the integral partnership and efforts of the Friends of Chester Creek Trail, a group founded by the late Mike Fusco in the early 1990s.

“Over the years, we have been fortunate to have the support of the Friends, their board members, and the leadership of current president Barry Pinkowicz, who made founding president Mike Fusco’s vision into a reality,” said White. “As dedicated partners, the Friends have been faithful advocates for the building of the trail for all residents to enjoy.”

In 2015, County Council acquired the abandoned rail as a trail project as part of the county’s 30-year, $22 million open space plan. In response to public interest in open space, County Council has taken a proactive approach in planning to identify needs and opportunities, as well as to address the challenges facing the county.

The first major step in this process was the completion of the county’s comprehensive plan, which was adopted in the fall of 2013.

Along with providing a recreational outlet for residents that promotes health, fitness, and well-being, the trail offers a first-hand encounter of some of Delaware County’s most historical sites, including the Civil War-era railway and landmarks to some of the county’s earliest settlements, including the 1850 mill hamlets of Rockdale, Lenni, West Branch, Parkmount, Knowlton, and Penn’s Grove.

Chester Creek Railroad began service in 1869, and it was eventually operated by Pennsylvania Railroad and Penn Central Railroad. It was constructed shortly after the Civil War in 1869 to run along Chester Creek, providing access the local mills and industry. During the Industrial Revolution, factories and warehouses operated adjacent to the rail line, serving the communities that formed near rail depots.