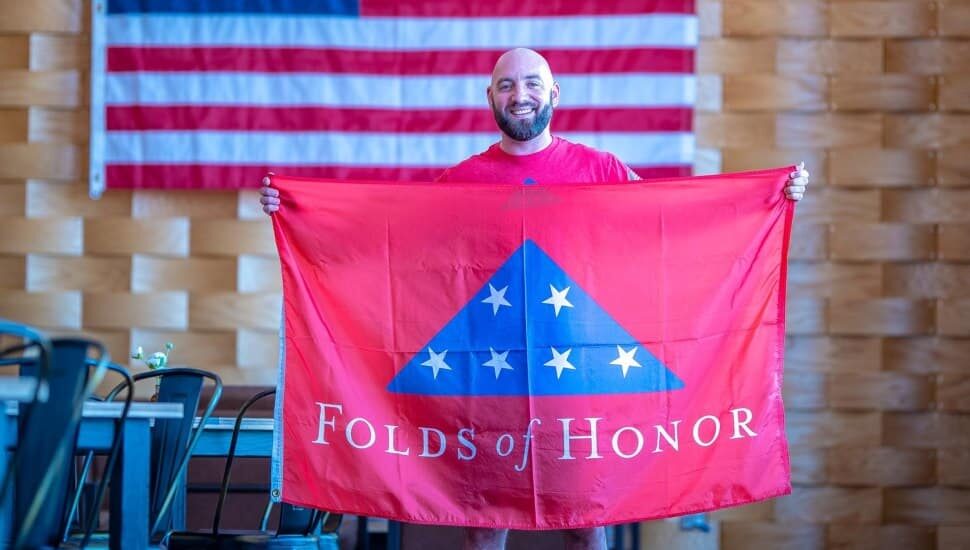 Image via Folds of Honor.

Folds of Honor, a national nonprofit with a local chapter encompassing Eastern Pennsylvania and New Jersey that provides life-changing scholarships to the spouses and children of fallen or disabled U.S. service members, is expanding its mission. The organization will now serve America’s first responders, including police, fire, EMTs, and paramedics.

There are more than two million first responders in the U.S. who respond to approximately 240 million calls made to 9-1-1 each year. Protecting us on the home front can be met with catastrophic injury or the ultimate sacrifice, and as such, this is a natural extension of Folds of Honor’s mission.

“This move reflects our purpose to meet sacrifice with hope,” said Lt. Col. Dan Rooney, the founder and CEO of Folds of Honor. “The decision to launch our first-responder scholarships is in reverence to those who paid the ultimate price on Sept. 11, 2001. The following day was a defining moment in our history, as Americans responded to tragedy by putting differences aside, rallying together, and standing as one. It is our hope that the expanded Folds of Honor mission will inspire unity once again. Without question, it will let first responders and their families know that they are not alone.”

The story of Folds of Honor began when Rooney was on a flight home from his second tour of duty in Iraq. As his flight landed, the pilot announced that the remains of Cpl. Brock Bucklin were being carried on board. Rooney watched through the window as Bucklin’s twin brother walked somberly alongside the flag-covered casket to meet his family on the tarmac. Among them was Bucklin’s young son. At that moment, Rooney truly understood the meaning of the phrase “freedom isn’t free.”

Since that evening, Rooney has committed his life to providing scholarships to spouses and children of America’s fallen and disabled service members. From its inception in 2007, Folds of Honor has awarded nearly 44,000 scholarships totaling nearly $200 million in educational impact. The scholarship recipients are as diverse as the place they call home. Minority recipients represent 41 percent of all scholarships awarded.

Helping the dependents of American heroes pursue their educational dreams is possible only through the generosity of corporations and everyday citizens. Ninety-one cents of each contributed dollar goes directly to scholarship funds. (Folds of Honor boasts a four-star rating from Charity Navigator and a platinum rating from GuideStar.) If you would like to support our nation’s military and first-responder families, you can become a Squadron member by joining thousands of American patriots who pledge $13 every month, or simply make a one-time donation.

On the local level, you can attend Folds of Honor events, sponsor, or become a chapter member or event volunteer. The calendar of events is on the website noted below.

Folds of Honor’s expansion into America’s first responders creates a powerful opportunity for new corporate partners to show their community where their values lie. Businesses interested in partnering should contact EasternPANJ.FoldsOfHonor.org or 610-442-5718 for more information.

For those interested in a scholarship, the application window is open between Feb. 1 and March 31 each year. To learn more about Folds of Honor or its scholarship awards, visit FoldsofHonor.org.