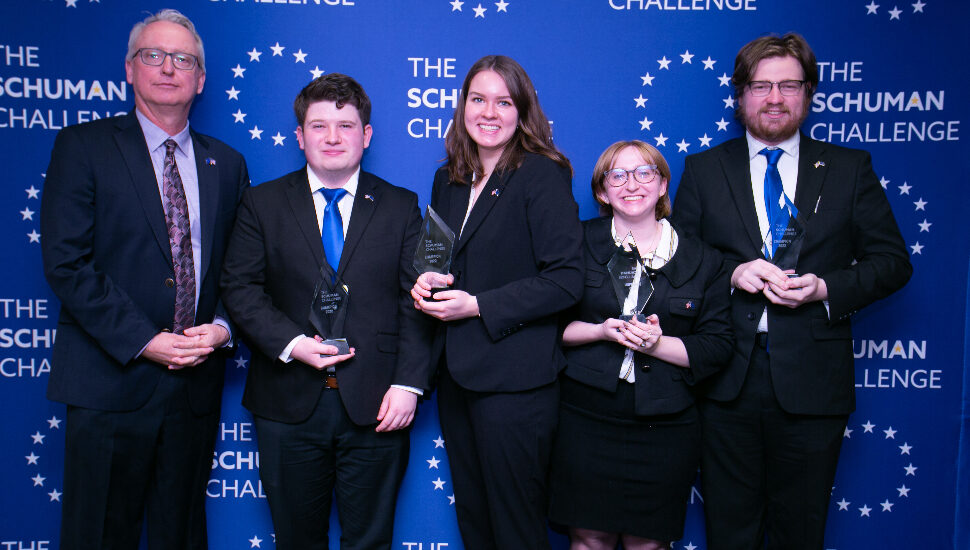 This spring, a team of four West Chester University students placed first in a national debating competition hosted by the Delegation of the European Union to the United States in Washington, D.C.

The annual national debating competition asks students to respond to a topic impacting international affairs and present their ideas in a 10-minute presentation before a panel of judges. This year’s prompt focused on E.U. and U.S. cooperation in Afghanistan following the withdrawal of the U.S. military.

Kerr and Brooks both graduated during WCU’s spring commencement ceremonies.

Loedel, the WCU professor, said competing gave students an opportunity to do what people who graduate with degrees in political science do – debate, negotiate, and present.

“Providing our students with these kinds of opportunities is something West Chester is very good at,” said Loedel. “And it proves that West Chester students can compete with the best and brightest across the country – and win.”

Since the competition, Brooks and Kerr have connected with their former judges on LinkedIn and social media. Both students highly recommend the experience for future Golden Rams.

“It’s a matter of going ahead and reaching out to those opportunities,” said Brooks. “You may not always succeed but learning experiences will come from it. I went with this opportunity, did it with my friends and it turned out to be a great experience with an amazing outcome.”

“If it’s something that interests you go for it,” said Kerr. “You never know what you’re going to learn, who you’re going to meet, or what’s going to come of it. I came away knowing a lot more about policy, Afghanistan, and the European Union that I didn’t know last December. It’s an educational opportunity but also a networking opportunity I wouldn’t pass up on.”

WCU Administrator One of 12 Higher-Education Officials in U.S. Chosen for Fulbright Program