Coaquannock Map Shows How Region Looked When Lenape Were Here 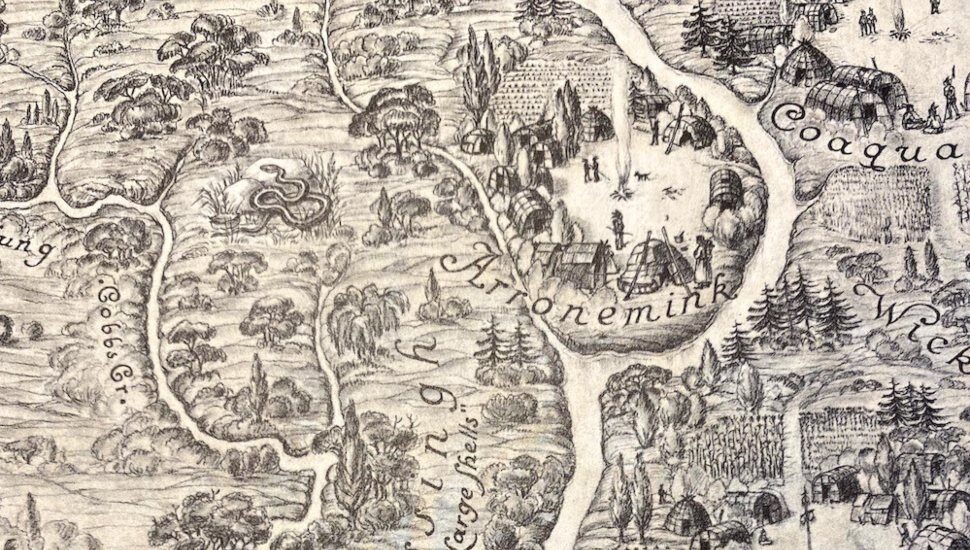 Image via the Historical Society of Pennsylvania,
A portion of the Coaquannock Map.

Today’s Native American population in Philadelphia stands at a mere .36 percent, yet the region was once home to the Lenape (translated as “Original People”), a flourishing community, writes Amy Cohen for hiddencityphila.org.

Now there’s a map on display at the Museum of Indian Culture in Allentown showing how the land looked before Europeans drove them from Pennsylvania to Oklahoma.

Since January 2020, the museum has operated a Historic Preservation Office to help members of the Lenape, also known as the Delaware Nation, connect to their ancestral land.

The Coaquannock Map was published in 1934, as a Works Progress Administration project.

The map, gifted to the Delaware Nation, identifies the Philadelphia region as Coaquannock, “Grove of Tall Pines,” when the area was first seen by white men.

It contains Indian villages, and aboriginal names of localities, streams and islands.

The Lenape were the first Native Americans to interact with the 17th Century Dutch, Swedish and British settlers.

The map shows a Native American man making wampum, a woman grinding corn with her baby sleeping nearby in a papoose and several men paddling a canoe. Others are in small wigwam villages.

Familiar names like Passyunk, Arronemink, Manayunk, and Wisahickin can also be found.

The Lenape Lived in Pennsylvania. Now They Want to Come Home

Did You Know? How the Brandywine River Got Its Name