The Lenape Lived in Pennsylvania. Now They Want to Come Home 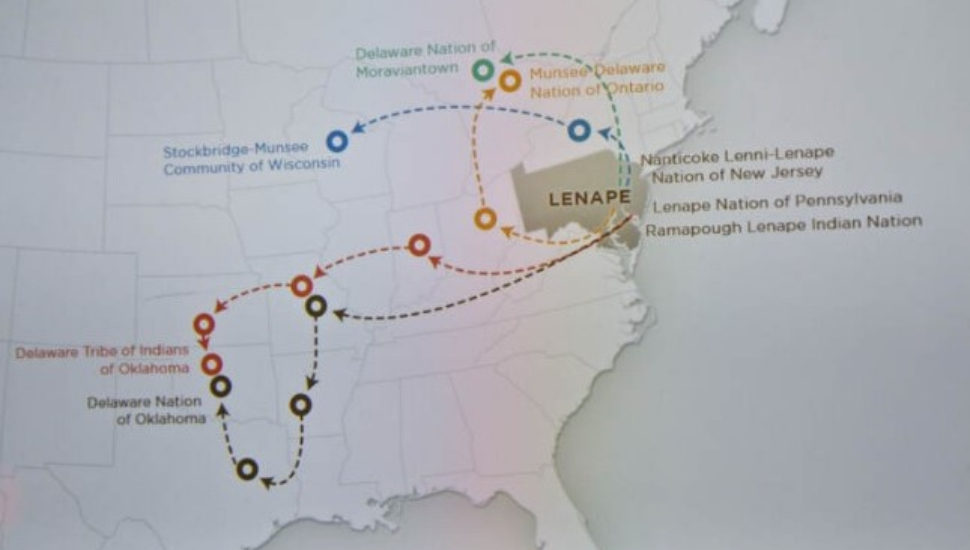 Image via Kimberly Paynter/WHYY.
A map at the Penn Museum in Philadelphia shows the forced migration of members of the Lenape Nation.

For thousands of years, the Lenape occupied territory in eastern Pennsylvania, New Jersey, parts of New York and the coast of Delaware, writes Kenny Cooper for whyy.org.

But the Lenape survive.

Curtis Zunigha is a member and cultural director of the Delaware Tribe of Indians, one of three federally recognized tribes of the Lenape (the name means “the real people”) in the United States.

“It is a history of deprivations, of swindles, of murders, of dishonorable behavior by the Dutch, by the British, and later by the Americans. We have been away from our homeland since that time, and yet we have persevered and managed to reorganize and reassemble ourselves,” he said.

Zunigha is on a mission to build a pathway so the Lenape can return to Pennsylvania.

Work is ongoing to get state and federal recognition of the Lenape Nation of Pennsylvania.

Locally, they have hosted language classes at Swarthmore College and it collaborated with Haverford and Bryn Mawr College on an exhibit.

“We are still here,” Zunigha said. “We have something valuable to bring to the table. We just want to be welcomed back.”

Read more at WHYY.org about the Lenapes.

Learn about the history and culture of the Lenni-Lenape.

Did You Know? How the Brandywine River Got Its Name