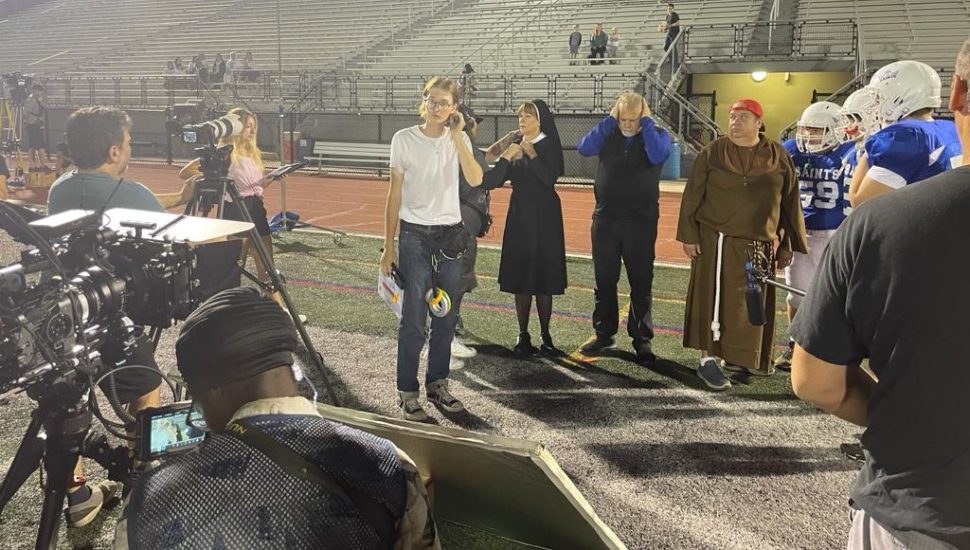 Image via The Hail Mary at Facebook.
Director Daniel Roebuck (third from left), and his cast and crew at a recent location shoot in Bethlehem.

As its director, Daniel Roebuck’s current film, The Hail Mary, is a high school football saga. As its screenwriter, however, the story is a nod to some influential teachers early in his school years. 6abc’s Alicia Vitarelli visited the set at its Lehigh Valley filming location.

Roebuck hails from Bethlehem. His early career was as a television actor, but he transitioned into a screenwriter/director in the mid-2000s.

He finds the area so cinematographically apt for the stories he tells, he has used the Lehigh Valley as a location repeatedly. He even commits to using local crews, actors, and extras.

Roebuck’s next release, now filming, is The Hail Mary.

“It’s about a very funny nun with a sense of humor and a sense of purpose who finds this man who needs redemption. So she cons him into creating a football team for her all-boys Catholic school,” Roebuck said.

The film stars Roebuck as the coach offered redemption by the nun. Growing up Catholic, it’s his way of celebrating the sisterhood.

“Hollywood makes fun of them, and it’s ridiculous,” he said. “We’re not. My movie is a tribute.”

The director-screenwriter’s commitment to faith-based entertainment runs deep. He established the Lehigh Valley-based nonprofit production company, A Channel of Peace, to encourage this exact kind of content.

On his site, Roebuck states: “A Channel of Peace is dedicated to producing and supporting films … that provide insight into the advancement of family, faith in God, and the values of love, forgiveness, good works, and gratitude.”

More information on The Hail Mary is at 6abc.

Here’s a news story on Daniel Roebuck’s casting of his movie, The Hail Mary.