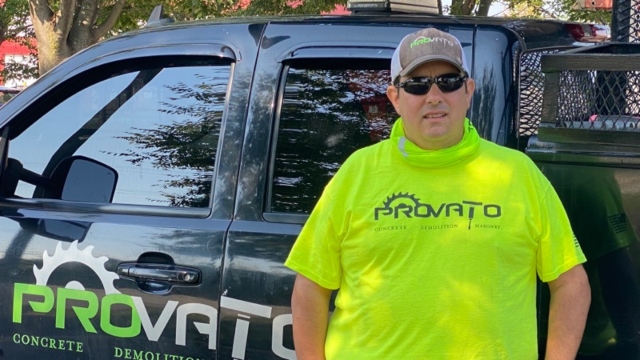 A client kept asking Jerry Scamuffa to go to a meeting of Business Network International, thinking he could benefit from the meeting, but Jerry never gave it much thought.

Jerry is owner of Provato Concrete Demolition and Masonry. His business covers Delaware, Chester and Montgomery Counties and the Main Line.

He has a shop and offices in Yeadon.

He’s been operating a residential and light commercial concrete and masonry business since 2009.

The client, who owned a sign company, introduced him to BNI after Jerry had done some masonry work at his property.

The client kept insisting so Jerry gave in and in 2013, he went to a meeting of the BNI Main Line II chapter.  He did a complete 180 and joined up.

Jerry is now going on his seventh year with BNI, having just renewed his membership in May.

As a contractor, his life pretty much revolved around other contractors. He had never belonged to a chamber of commerce, never did any real networking. BNI was an eye opener.

“I got in a room with business owners that I never had access to ,” he said.

He now gets to mingle with a range of business people, from personal injury and family law attorneys, to insurance brokers, investment bankers, marketers and home organizers.

There are 63 members in the Main Line II chapter, though chapters can have as few as 10 members.

BNI describes itself on its website as a business referral system.

“An annual membership fee gives members access to mentors, other business professionals and BNI U, a learning center to help you ‘build your skills and confidence,’” according to the BNI website.

BNI encouraged Jerry to up his public persona.  He had to show up at meetings well groomed.  Addressing the group during meetings helped him overcome his public speaking discomfort, talking about himself and his business.

Jerry takes it a step further.

He considers the man who runs the entire BNI network to be a trusted mentor and the members of the group his life-long friends.

The networking and friendship extends globally. There are 270,000 global members and 9,500 global chapters.

There are 12.2 million member referrals and there is $16.7 billion in member generated business, according to the website.

Trusted relationships are at the core of the BNI system.

Members can only get into local chapters when referred by an existing member.

The members are bound by a code of ethics when they join.

That means when a member is referred by another member to a client, that business person’s work can be trusted.

If someone asks Jerry to recommend an electrician he trusts, Jerry can find someone through BNI to send over.

The group can make sure the work is done satisfactorily and if a referral behaves unethically with the client, there are specific action steps BNI will take to remedy the behavior, Jerry said.

“it’s just peace of mind for whom I’m referring,” to know that we are bound by a code of ethics,” he said.

Jerry’s also been able to help friends who live far away get the help they need. When a friend bought a house in Lima, Ohio, he was looking for contractors to help fix it up. Jerry was able to use the BNI network to find him trusted Lima, Ohio-area contractors, even though he had never met them.

“Each member of your referral network contributes to your success and you to theirs. Now more than ever, building trusted relationships is critical to business success,” the BNI website states.

To speak with him about how BNI helped him grow his business call Jerry at 484.237.1862 or email him at jerry@provatocdm.com.