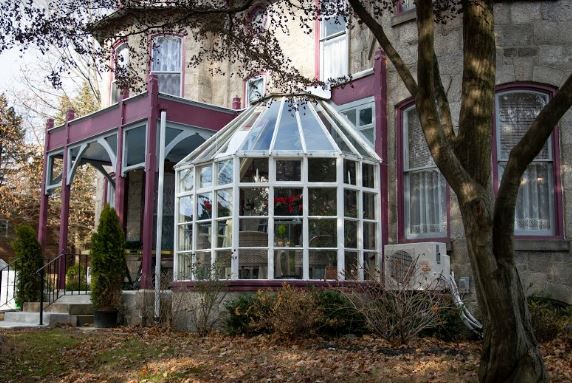 An exterior view of the Gifford-Risley house in Media. Image via submitted photo to Daily Times.

Media Borough has its first-ever Bed and Breakfast at 430 N. Monroe Street, writes Susan Serbin for the Daily Times.

Monika and Z Rehoric bought the Gifford-Risley House nearly four years ago and have been renovating it for two years after convincing Media Borough Council that the “B&B” was a suitable use and a benefit for the borough.

The house was built in 1877 for Elton B. Gifford, a successful Philadelphia merchant. Eleven years later, the property was bought by Dr. Samuel D. Risley, a Civil War veteran, noted ophthalmologist and president of Wills Eye Hospital.

In the 1960s, it was divided into apartments.

The Gifford-Risley House was placed on the National Register of Historic Places in 1990.

“We made three attempts to buy the house,” said Monika Rehoric. “We knew immediately what we wanted to do with every room. It was just screaming for a B&B.”

Rather than a complete Victorian design, the decision was made to span the ages with themes for the seven guest rooms from the Renaissance to early 20th Century Arts and Crafts.

The Gifford-Risley House also has a parlor, library, dining room, a veranda, and an enclosed conservatory.