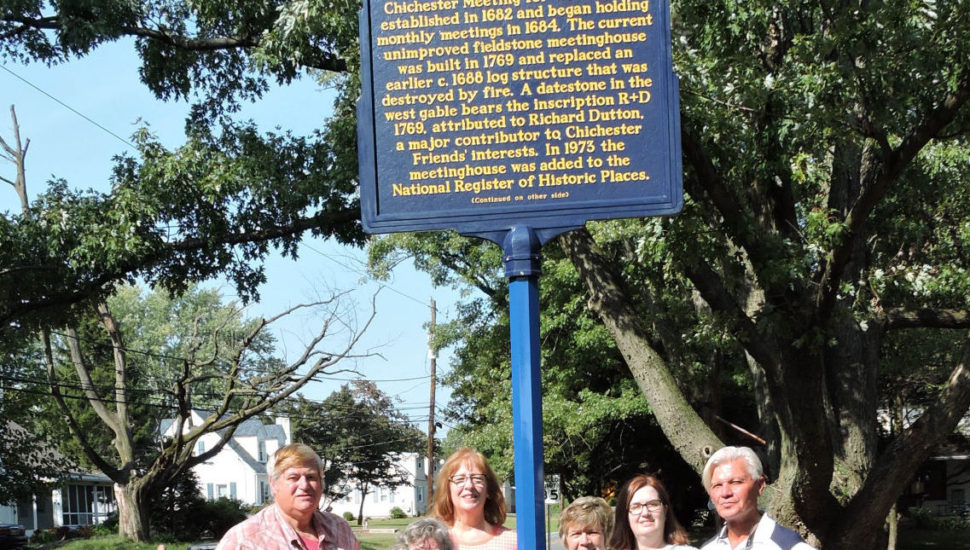 The Chichester fieldstone Meetinghouse now has its own historical roadside marker, dedicated Sunday at a 250th anniversary celebration, writes Loretta Rodgers for the Daily Times.

“Today’s event was very well attended,” said Chichester Historical Society President Mary Griffin. “We are so happy to have the opportunity to share this gem with the community.”

An example of 18th century Quaker architecture, the fieldstone meetinghouse building replaced a circa 1688 log structure that was destroyed by fire in 1768. A date-stone in the west gable bears the inscription R*D 1769, representing Richard Dutton, who was a major contributor to the Chichester Friends.  Seventh-generation members of the Dutton family were on hand for the celebration.

In 1973, the meetinghouse was added to the National Registry of Historic Places.

Quakers arrived in the area in the early 1670s to escape religious persecution in England, meeting firsts in their homes, than in a modest wooden structure.

The current structure remains as it was originally built except for a privy and small porch. No plumbing or electric wiring has ever been installed. Heat comes from a corner fireplace and a central wood stove, which remains in operation.

Pa. Uses a Fine Approach — Meaning Both Workable and Costly — to Tamp Down Lanternfly Infestation