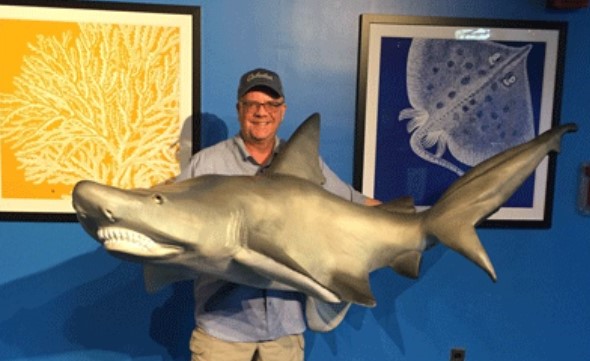 McKay was commissioned by the aquarium in Camden, N.J., to create a piece that would be as realistic as possible.

The shark is made of lightweight and durable Styrofoam, and is suspended four feet off the ground. It’s used daily by visitors for photo ops.

McKay took classes with the William Rush Woodcarvers to perfect his carving skills. The piece commissioned by the aquarium had to be anatomically correct, so he also had to study sharks in detail. To finalize his work, McKay used spray paint and airbrushing for the fine details.

This was also McKay’s first 3-D carving, but he is certain it won’t be the last.

“I’m not one to promote myself, but people seem amazed that this shark was my very first attempt at carving,” said McKay. “I’ve created sculptures before, but never like this. Now, I’m really looking forward to doing it again.”