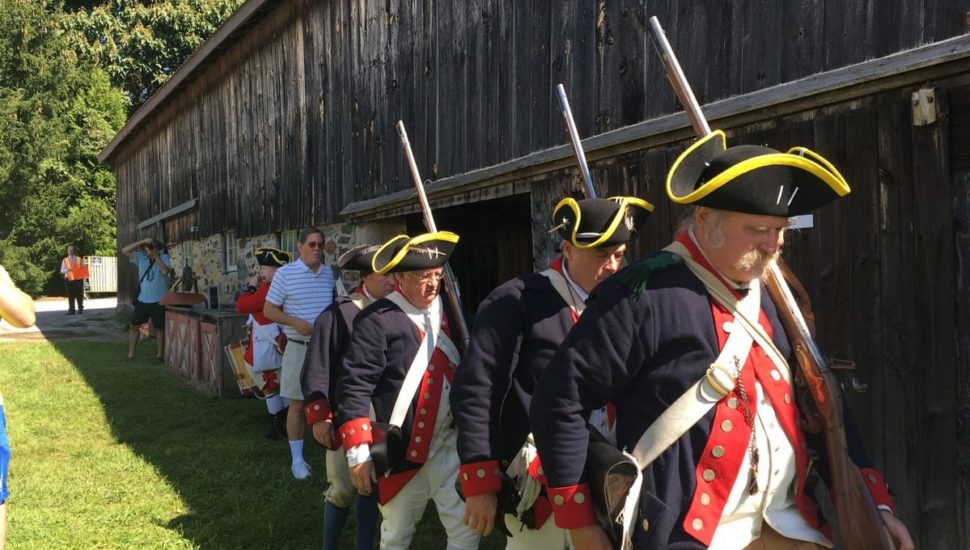 The Civil War Trust has purchased a 10-acre patch in Birmingham Township that was the site of a famous Revolutionary War battle. Image of reenactors marching at Dilworth Farm via Jason Nark, Philadelphia Inquirer.

The site of a famous Revolutionary War battle in Birmingham Township has been purchased by the Civil War Trust to ensure its preservation, writes Jason Nark for the Philadelphia Inquirer.

The nonprofit bought the Dilworth Farm for $850,000 and marks the first Revolutionary War battlefield purchased in Pennsylvania using grants from the American Battlefield Protection Program. These are funded by the Land and Water Conservation Fund and administered by the National Park Service.

According to Jim Lighthizer, president of the trust, there are plans to preserve additional parcels in and around the farm.

“When you save battlefields, you create outdoor classrooms,” said Lighthizer.

The Brandywine Battlefield spans nearly 35,000 acres in both Chester and Delaware counties and is the site of largest single-day battle that took place during the War of Independence. During the battle, George Washington’s continental army was outflanked and nearly decimated by British General Sir William Howe on Sept. 11, 1777.

Although the battle was lost to the British, the continental army regrouped to go on and win the war. Now the historic land, which straddles the border between Chester and Delaware counties, is titled to Birmingham Township in perpetuity.

Read more about the Civil War Trust in the Philadelphia Inquirer here.