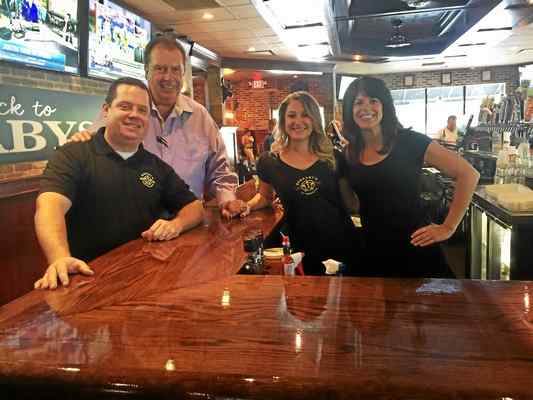 Having been closed four months from a fire, Barnaby’s in Havertown recently re-opened its doors to a large crowd. Image via Peg DeGrassa, Daily Times.

Barnaby’s Restaurant in Havertown recently re-opened its doors to a large crowd, following its four-month closure from a fire, writes Peg DeGrassa for the Daily Times.

The popular establishment suffered a setback on May 7, when fire destroyed the outside deck and caused serious damage to the building.

The restaurant held a soft opening at the beginning of the month and the general public was welcomed the next day. Now the restaurant is back to its usual schedule, open seven days a week from 11-2 AM.

The reconstructed eatery and tavern boasts an all new interior and with three bars, three private party areas, and a big deck. Extra seating has also been added thanks to the redesign of the front entry, with 250 seats on the main floor and deck and another 250 in the private rooms.

“We couldn’t be more excited to be back open and show our new and improved restaurant,” said Dan Hurst, general manager and executive chef. “The staff is happy to be back home, and our customers keep telling us that they genuinely missed the place.”

Read more about Barnaby’s re-opening in the Daily Times by clicking here.