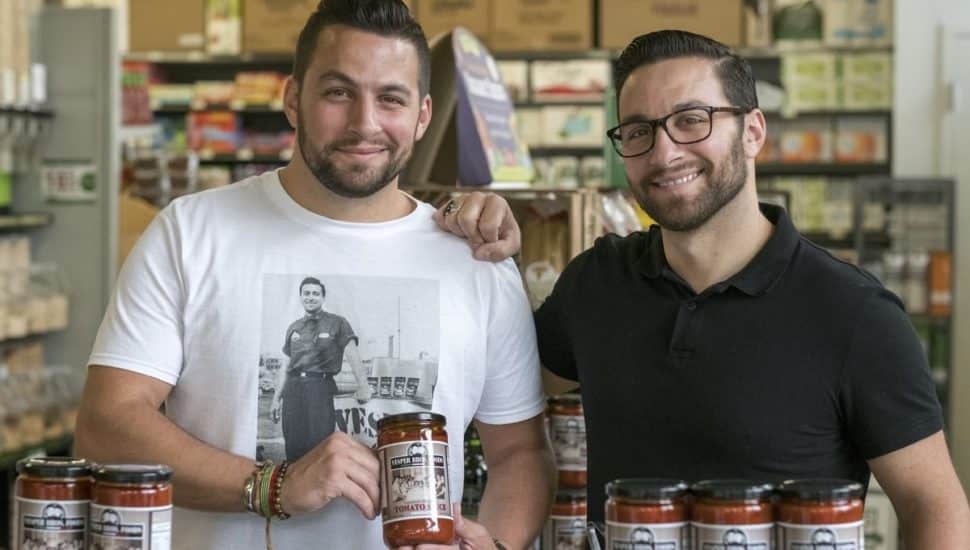 Bill and John Vesper topped the taste of Grandma’s Italian red sauce and managed to maintain its quality in a jar. Now, their sauces are pouring onto shelves. Image via Ed Hille, Philadelphia Inquirer.

Grandma’s cooking is usually the best, but the Vesper family recipe perfected over a Wallingford stovetop for decades was somehow topped by twin grandsons John and Bill Vesper.

And the result has been a delicious gravy train that has allowed them to close up their delis.

What started as a simple 2012 display at the family business — John’s Village Market in Wayne, Berwyn, and Brookhaven — has since been poured onto shelves at farmers’ markets, Whole Foods, and Wegmans at a rate of 100,000 jars per year, according to a Philadelphia Inquirer report by Diane Mastrull.

Instead, she grabs the Vesper Bros. Foods label, which comes as a marinara, arabiatta, tomato basil, and pizza sauce.

After Grandma and local deli customers, the Vesper Bros. sauces were picked up by Linvilla Orchards and the Swarthmore Co-op, then Whole Foods.

“I had never tasted a jarred sauce that was so good,” said Whole Foods marketing leader Charlene Nolan.

Vesper Bros. now hopes that same sentiment will spread across the whole of Philadelphia and beyond.

“We think if we can become a household name in the Philadelphia area, it will be a lot easier to expand to Baltimore, Washington, D.C., New York, out west,” Bill said.

Read more about the journey of the Vesper Bros., from 2002 Delco Christian grads to red-hot entrepreneurs, in the Philadelphia Inquirer here.