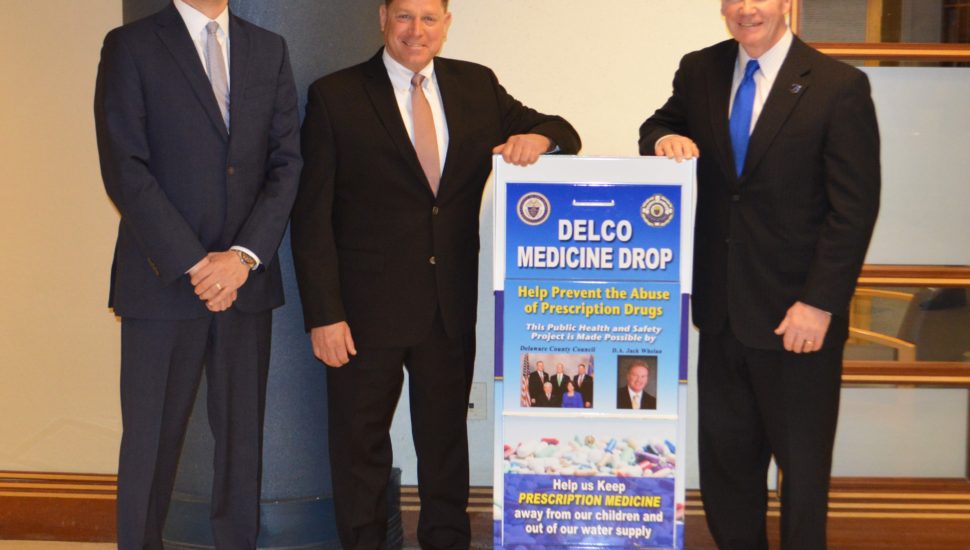 The Drop Boxes are a secure location for residents to dispose of unused, unwanted, or expired prescription drugs that can be lethal when they fall into the wrong hands. Residents can safely dispose of prescription medications and be reassured that no one will steal them out of their medicine chest, and that they will be disposed of properly without harming the water supply. Medicine can be disposed of in the boxes anonymously, for free, at any time during the year.

“Since forming the Heroin Task Force in September 2012, we’ve learned about the drugs that lead to heroin use, particularly opioid pain relievers,” said White. “By getting unwanted medications out of our homes, we can reduce the number of pills that may get into the wrong hands and prevent addiction.”

Studies show that residential supplies of pharmaceutical controlled substances are the supply of choice to young people and criminals. These medications are effective when used properly, but many are highly addictive and dangerous when abused. Some individuals who misuse prescription medications, particularly teenagers, believe these substances are safer than illicit drugs because they are prescribed by a doctor or dentist, and dispensed by a pharmacist.

Commonly abused medications include pain relievers such as OxyContin and Percocet.

“Prescription drugs are often the target of theft and misuse,” said Whelan. “Statistics show that many young people become addicted to opioids by first taking a prescription drug, which they get from medicine cabinets of their parents, their grandparents, and friends.

“One way to prevent addiction is to offer convenient, secure, and environmentally safe drug disposal programs to decrease the supply of unused prescription drugs in the home.”

Medications in standard containers can be deposited into the drop boxes. Loose medications can be put in plastic bags. Liquid medications should be enclosed in secure containers.

The Heroin Task Force began installing Medicine Drop Boxes in October 2013. Today there is a drop box at almost every police station in Delaware County, as well as a box located at the Government Center in Media and Riddle Memorial Hospital.

To date, more than 12,000 pounds of medications have been collected through the drop box program. Crozer is the second hospital to receive a Drop Box. The Heroin Task Force has been working with area hospitals to create partnerships to help prevent and treat addiction.

How a Heart Transplant Made Bill Soloway into a Steelers Fan