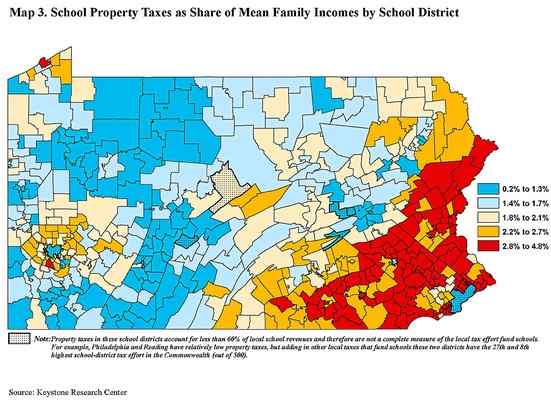 This map from the Keystone Research Center’s study illustrates how high property taxes as a share of household income is a problem mostly in Eastern Pennsylvania.

An independent analysis entitled “Who Pays for Property Tax Elimination?” by the Keystone Research Center has found that middle-class households will end up paying more in taxes if the proposed bill on property tax elimination passes, writes Evan Brandt for the Daily Local News.

The bill proposes to compensate for revenue lost from eliminating property taxes by raising the personal income tax from 3.07 percent to 4.95 percent and increasing state sales tax from 6 to 7 percent.

The proposal would eliminate a significant tax liability for business properties, which currently pay a considerable portion of school property tax. That revenue loss has to be made up by individuals, said Mark Price, labor economist for the Budget and Policy Center and the report’s author.

The study showed that annual taxes for households with income between $40,000 and $63,000 would go up by 0.9 percent. However, the Pennsylvania Taxpayers Cyber Coalition, a group representing several grassroots organizations working to eliminate school property taxes, has criticized the report.

Read more about the survey’s findings in the Daily Local News by clicking here.