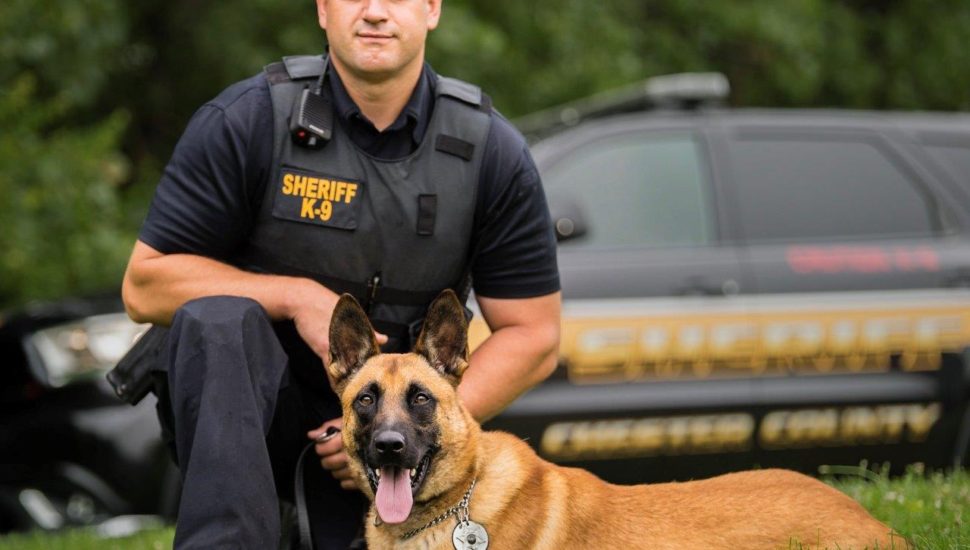 By the Chester County Sheriff’s Office

A former Marine brought an exemplary background with him when he applied for a position as a Chester County deputy sheriff in 2014.

Both the credentials and demeanor of Mike Sarro, 37, an award-winning, 2013 graduate of the Delaware County Police Academy, prompted praise that was followed by a dramatic, short-lived pause.

Capt. Jason Suydam recalled being impressed with Sarro’s responses during one of the interviews. From his vantage point in the room, Suydam then happened to notice that Sarro had a prosthetic leg. Initially taken aback, he felt strongly that Sarro could do the job; however, he felt obligated to share that information with Chester County Sheriff Carolyn “Bunny” Welsh.

“I remember being momentarily surprised when Jason asked me if knew that one of our recruits had lost a leg,” Welsh said recently. “I immediately asked whether he could pass the physical requirements. When I was told that he could, that was really all I needed to hear.”

Getting the job represented a milestone for Sarro after a nearly decade-long struggle, a journey that dated back to a fateful day in Iraq.

Sarro, who grew up in Phoenixville, said a brief stint at Northampton Community College convinced him that he wasn’t well-suited for college life. Inspired by both of his grandfathers’ military service, he joined the Marines at age 18 and spent most of the next five years at Twentynine Palms, a military base in California.

When that duty ended, Sarro felt a push to use his training in actual combat and joined a Phoenixville Army National Guard unit that was about to be deployed. He had already met the woman of his dreams, and he and Kelly Swift decided to marry before he left. He joked that the quickly-arranged ceremony in Pottstown district court constituted a bargain with its $76 price tag.

Sarro described the routine in Iraq during 2005 as “feast or famine.” He said some days were difficult, punctuated by the chilling sounds of Iraqi insurgents’ firing mortars at the base. “There was always an eerie feeling when everything got quiet,” Sarro said. “That’s when you knew something bad was about to happen.”

On May 14, 2005, Sarro was riding as vehicle commander in the front of the third Humvee of a four-vehicle caravan when darkness engulfed him. “Everything turned black,” he said. “I didn’t hear anything; black smoke was everywhere.”

A land mine, strategically buried under the roadway, had exploded, blasting through the front of the vehicle. Then gunfire erupted, and the men quickly realized they were in a “kill zone.” As they fought to take cover, a bullet from an insurgent’s AK-47 ripped through Sarro’s lower right leg. About 25 minutes later, as the exchange of gunfire continued, Sarro said he felt searing pain in his leg that didn’t subside.

Sarro credited Dave Smith, a member of his unit who now works as a physician’s assistant, with saving his life by fashioning a tourniquet around the wound. The men were rescued another 20 minutes later, and with his family’s support, Sarro began a painful, three-year regimen of surgeries and rehabilitation designed to avoid amputation.

His wife, who had been teaching kindergarten in Kennett Square, moved to Texas for the summer, where Sarro was hospitalized after returning from Iraq. “She was amazing,” Sarro said. “She was in the room so often that one morning someone tried to draw her blood because they thought she was a patient.”

Sarro’s experiences fueled a passion for emergency medicine, and when he finally returned home, he went to EMT school in 2007. “I didn’t want anyone to ever feel helpless,” he said. In 2009, he became a paramedic, continuing a grueling recovery process that he hoped would lead to his ultimate goal: graduating from the police academy.

But after five years of effort, Sarro got a wrenching reality check when he failed the academy’s physical agility test. Realizing that his impaired appendage represented an obstacle he couldn’t overcome prompted his resolve to pursue another option: amputation.

A fan of medical TV comedies like “M*A*S*H” and “House,” Sarro exercised his sense of humor the night before his scheduled surgery. He used a black marker to write “do not cut” on his left leg.

He returned home from the hospital right before Christmas in 2010 and began another rigorous rehabilitation, this time with a heightened sense of purpose. He remembered the first day he put on the prosthetic. “It was painful; basically you’re putting your leg in a vise,” he said.

Sarro said his dream of graduating from the Police Academy kept him going, and he achieved it with honors in July 2013. He said he knew in advance that he would get no special treatment, which was precisely what he wanted.

“They held me to the same standards,” he said, “and that’s the way it should be. Otherwise, it isn’t fair to anyone.”

After receiving his police certification, Sarro, who had been working as a medic in Delaware County, got a part-time job as a police officer in Yeadon. The following year, he learned that the Chester County Sheriff’s Office had openings for full-time deputies. He decided to e-mail the sheriff herself and was pleased when he got a quick response, urging him to apply, which he did.

“She has been a huge part of why I love working here,” he said. “The support is just fantastic.”

Last year, Sarro joined the Chester County Sheriff’s K-9 Unit. He welcomed Dexter, a Belgian Malinois, into his family, which now also includes three children – Michael, Tyler, 5, and Anna, 3. “He might be the hardest one to manage,” Sarro said of his high-energy K-9 partner.

Dexter, whose specialty is sniffing out narcotics, has also attained tracking certification and is currently being trained in patrol work. Sarro said his children have fun with Dexter at home, and he’s also a big hit at school and community events. “It’ll change your world,” he said of the 24/7 responsibility.

And for anyone interested in changing theirs, Sarro espouses the value of a positive outlook and perseverance. “It all starts with one step, one day – only one step,” he said. “You will reach the goal. Don’t let anyone say ‘not today.’”

Last month, a U.S. Marine veteran who lost his legs during a tour of duty in Afghanistan made national news when he was sworn in as an officer with the Suffolk County Police Department in New York. Matias Ferreira is believed to be the first double amputee to assume full-time police duties in the country. Sarro insisted his accomplishments pale in comparison.

“That has to be so much more difficult,” said Sarro. “I would love the opportunity to talk to him about it. What he’s done is so impressive.”