TSA Officer from Boothwyn on Free Lunch for Unpaid Airport Workers: ‘The Support Has Been Amazing’ 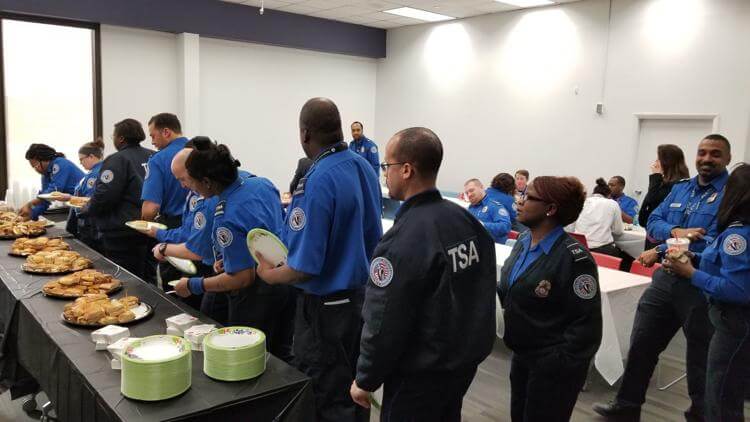 TSA workers who are doing their jobs at Philadelphia International Airport without pay due to the government shutdown were recently treated to a free lunch from the Philadelphia Airline Management Council, writes Kathleen Carey for the Daily Times.

“We came together to support our fellow brothers and sisters at the airport,” said PAMC chairperson Janet McMurtry. “We’re like one big family.”

PAMC is an organization of airport stakeholders, including airlines, vendors, and others. This was the first time the organization had provided such a meal during a government shutdown.

“This is awesome,” said TSA officer Pete Mancini of Boothwyn. “The support has been amazing.”

Also, the airport, in partnership with Philadelphia Marketplace, is providing meals for federal employees every Monday from 8 AM through 8 PM until the end of the shutdown.

The airport is also asking for donations of non-perishable food and other essentials from the public to help federal employees during the shutdown.

“TSA, FAA, and CBP employees have continued to come to work to do their jobs to keep our airport, travelers, and employees safe and the airport functioning,” said airport CEO Chellie Cameron.

Read more about the complimentary lunch in the Daily Times by clicking here.