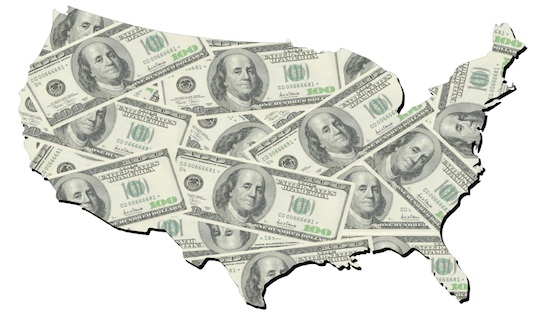 The personal income accumulated within the Greater Philadelphia area last year is enough to give each resident $57,173, if spread equally.

That amounts to a total of $347 billion, and ranks the Philly metro as the eighth-wealthiest across the entire United States, according to a Philadelphia Business Journal report by G. Scott Thomas.

The rankings are based on the latest statistics for total personal income — from all sources — published by the U.S. Bureau of Economic Analysis, which are taken from 2015.

Ahead of Philadelphia in raw income is top-ranked New York City with $1.3 trillion, followed by Los Angeles with $727 billion; Chicago with $515 billion; Washington, D.C. with $396 billion; San Francisco with $367 billion; Dallas-Fort Worth with $363 billion; and Houston with $362 billion.