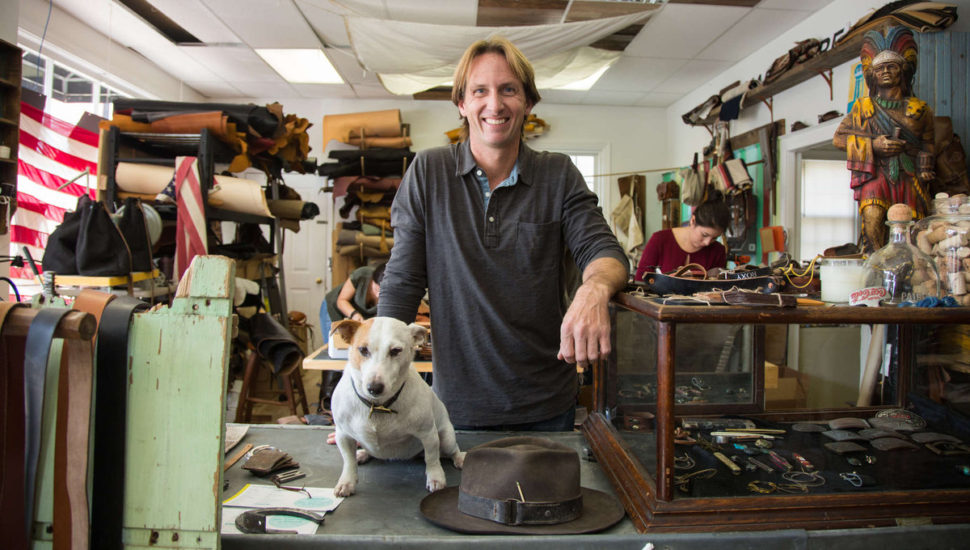 The passion to make something of value out of scraps never really left Mike Balitsaris.

After a career of resurrecting run-down industrial buildings and channeling sand into oil and gas wells, his Wayne-based custom leather company Waltzing Matilda has finally come full circle too.

Initially a creative passion that helped him earn spending money as an English major at Villanova University, his company is now a $1.5 million multi-state operation that does business with Apple, Bloomingdale’s, Starwood Hotels, high-end boutiques, and even his alma mater, according to a Philadelphia Inquirer report by Diane Mastrull.

“I don’t want to compete on margin. I want to compete on creativity,” Balitsaris said of Waltzing Matilda’s products, which incorporate leather from across the world, as well as unique materials like an alligator skin, Navajo rug, or African fabric.

“These things do have a soul. Think about this bag,” he said of a sling made from Swiss Army ammunition cases. “Pieces from World War II. Who the hell knows what it saw?”

In Waltzing Matilda, Balitsaris is not only recapturing the spirit of his leather scraps; he’s recapturing labor in places where business has gone overseas.

That approach has been driven by the melancholy he encountered at Preferred Real Estate, as he toured abandoned properties where workforces in some cases had diminished from “20,000 workers to none. It would crush us.”

Read more about the story behind Waltzing Matilda, as well as the role Preferred Real Estate Investments and his Radnor frack-sand firm Preferred Sands played, in the Philadelphia Inquirer here.

To Highlight Holiday Gift-Giving, West Chester’s IT Edge Hones In On Digital Marketing for Retailers

Old License Plates a Gold Mine for Villanova Student