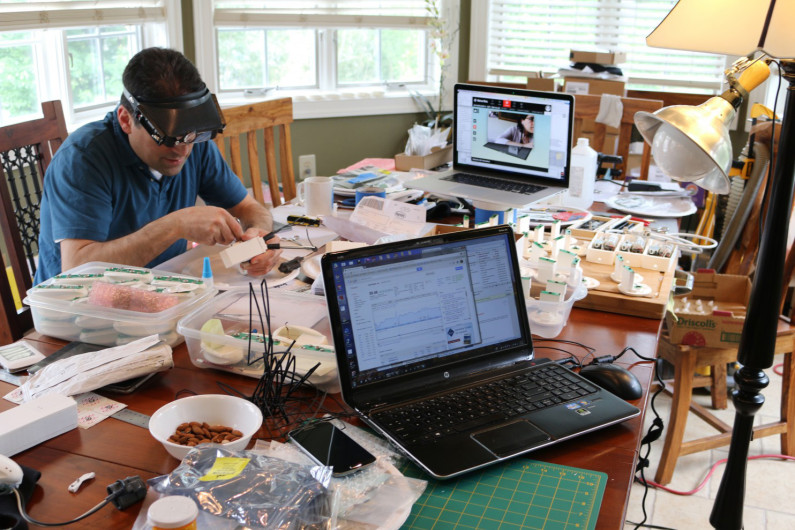 Basil Harris works on prototype tricorders, while talking with his sister Julia Harris via video chat on the laptop computer. Image courtesy of Basil Leaf Technologies.

Through years of working endless nights and weekends, a Paoli E.R. doc and his siblings, all originally from Newtown Square, have already managed to turn science fiction into reality.

And now, they’re just one final vote away from winning $6 million or more in the Qualcomm-funded XPrize competition to create the fictitious tricorder from Star Trek.

Dubbed Final Frontier Medical Devices, the team of seven led by Basil Harris has juggled full-time jobs, evening and weekend engineering marathons, and 3D-printed prototypes to beat out 310 of the other 311 competitors spanning 38 countries, according to a report in The Washington Post by Karen Heller.

Now, all that remains is the Harris family plus three recruits, the 50-member Dynamical Biomarkers Group led by a Harvard Medical School physicist and backed by HTC and the government of Taiwan, and an April 12 deadline.

Originally unsure whether his tricorder experiment would be a hobby or a startup venture, Harris has gone well beyond his top-10 success criteria; the team has already won $425,000 of the $500,000 it’s invested by becoming a finalist.

It now faces the prospect of $6 million to win and $2 million to lose, plus another $1 million if its tricorder is most accurate.

“The two finalists have developed medical devices that may transform personal healthcare,” the article stated. “The global market is large enough to support both tricorders, both team leaders say, and the companies that ultimately manufacture the products stand to make millions.”

And that’s precisely what Harris’s team plans to do with its device, called DxtER, which can diagnose 34 different conditions and is currently in a clinical trial at Main Line Health.

“The great thing about this device is it’s in the patient’s hands,” Harris said. “You can manage your own health, get your own vital signs. It will empower you to find out if you have strep throat.”

Read more of the Final Frontier team’s story in The Washington Post here, and check out previous DELCO Today coverage of the XPrize tricorder competition here.