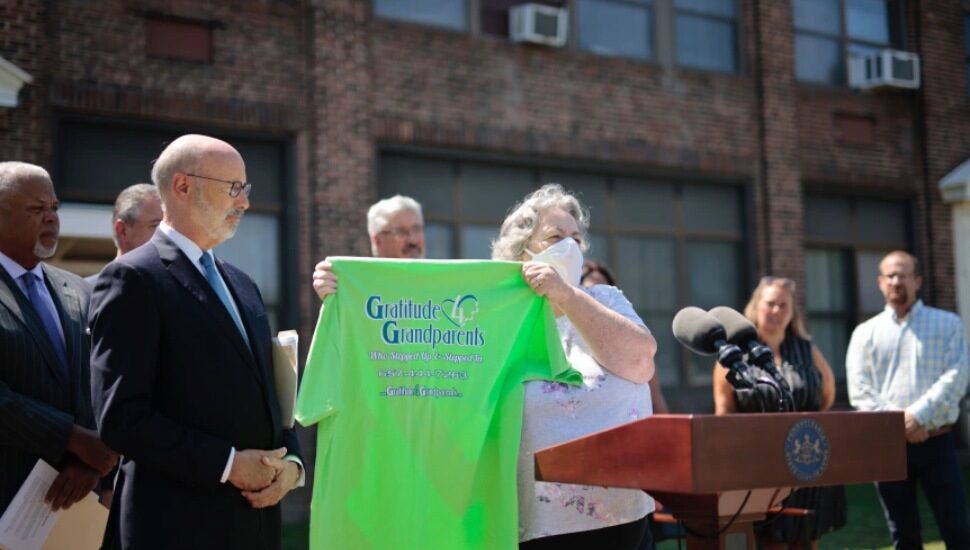 Image via submitted photo to the Daily Times.
Gov. Wolf, in Folcroft with resident Angie Carr and officials.

Pa. Gov. Wolf was in Folcroft Tuesday to re-introduce a plan to send $2,000 checks directly to Pennsylvania residents, writes Pete Bannon for the Daily Times.

While there, he heard about some of the difficulties people in Folcroft are facing.

“Historically, our community has been overlooked by people in positions like yours – we recognize and appreciate that you have never forgotten us and communities like ours.” said Folcroft Council President Joseph Papaleo.

Papaleo said Folcroft residents have been struggling since before COVID and now “bear the brunt of the residuals of this pandemic—namely inflation.”

Angie Carr is a 20-year Folcroft resident taking care of her two great-grandchildren.

COVID has “knocked the Folcroft community for a loop,” she said. “It comes to what do I pay this month and what can I do without”.

Wolf spoke in front of the Borough’s food pantry, put in place for residents by Borough administrator Ramona Petty.

The PA Opportunity Program did not get funded in this year’s budget but Wolf vowed to keep fighting for it.

The program makes direct payments of up to $2,000 to an estimated 250,000 Pennsylvania households.

Read more at the Daily Times about a visit to Folcroft from Pennsylvania Gov. Tom Wolf.

Now Teachers Teammates Has a Home for All of Its Stuff, Thanks To Volunteers

See How 8 Delaware County Shops Ranked on a Cheesesteak Tour