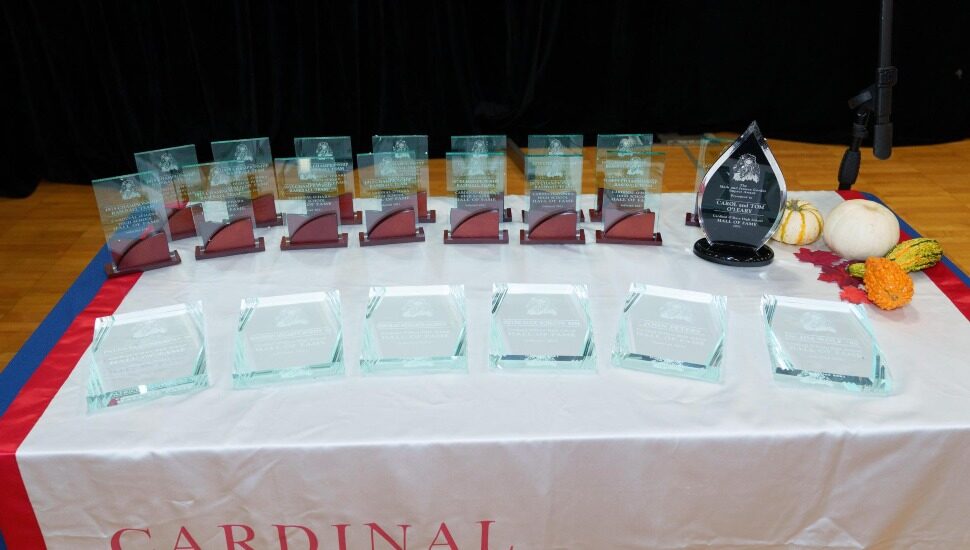 Image via COHS.com.
Hall of Fame awards for inductees in October 2021.

The Championship Girls’ Swim Teams from 1980 to 1988 will also be inducted at the ceremony.

The individuals have been chosen for their accomplishments while students at the school and for their personal and professional achievements throughout their lives.

Stephen Buonato was a standout student and athlete on both O’Hara’s baseball and football teams, serving as team captain of both for three years.

At the University of Pennsylvania, he was selected First-Team All Ivy League center twice.

Robert Dumont was team captain of the track team his senior year while earning All-Catholic and All-Delco honors.

He is a Senior Advisor at Xactus in Broomall, and a significant supporter of O’Hara’s tuition assistance program.

He is known throughout the Delaware County area for his business acumen and philanthropy.

Kate Dessart-Mager was an outstanding basketball player during her time at O’Hara and a three-time first team All-Catholic, MVP of the Philadelphia Catholic League, the Delaware County Daily Times Player-of-the-year, and a McDonald’s AllAmerican.

She went on to an outstanding basketball career at Villanova, where she was honored as an Academic All-American.

Edward Malloy was a standout basketball player and is the all-time leading scorer for boys’ basketball at O’Hara, amassing 1,222 points.

He is one of only two boys to reach the 1000 point plateau. Ed was All-Catholic, All-Delco and team captain both junior and senior seasons.

As an NBA referee, he has officiated 1,064 regular-season games over 17 seasons. He has also worked 111 playoff games, including 10 Finals games and the 2017 NBA All-Star Game in New Orleans.

Sister Rose Martin is the Executive Director of Hope Partnership for Education, an independent middle school and adult education center serving the children, families and adults of eastern North Philadelphia, one of the city’s poorest areas.

The Championship Girls’ Swim Teams from 1980 to 1988 will also be inducted, acknowledging almost a full decade of girls swimming championship teams in the 1980s.

These Lions live out the O’Hara legacy of Pride, Excellence and Tradition through their achievements as well as their service to others.

About the Cardinal O’Hara Hall of Fame

To become a Hall of Fame inductee, people are nominated by fellow alumni and members of the Cardinal O’Hara community.  Criteria is based on achievements in athletics, performing arts and school/community service while a student at O’Hara, as well as life/career achievements after graduation and continued service to the community.

A selection committee of alumni, administrators and the president of the school determine who will be inducted from the nominees.

The Hall of Fame was first created in 1973 and became an annual event in 1997.  There are currently 158 alumni, faculty and coaches who have been inducted.  There are also seven championship teams in the Hall of Fame.

Find out more about Cardinal O’Hara’s Hall of Fame.

Here’s a video on John Peters, one of the Cardinal O’Hara 2021 Hall of Fame inductees.