Chester and Eyre Park Never Quite Recovered After Flood in 1971 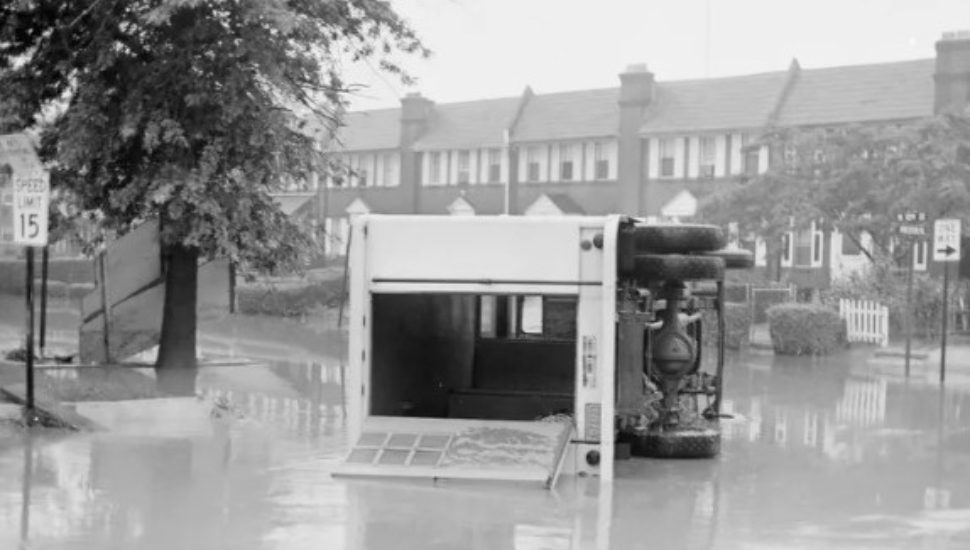 Image via William F. Steinmetz, The Philadelphia Inquirer.
A new police rescue vehicle is on its side in floodwaters at Eyre Park in Chester back in 1971.

A flood worse than anything Hurricane Ida delivered devastated Eyre Park and parts of Chester 50 years ago, writes Anthony R. Wood for The Philadelphia Inquirer.

A 16-foot tidal wave came out of Chester Creek back in 1971, killing 10 people and destroying the down town.

Eyre Park, a tight, vibrant neighborhood, received the brunt of it.

But it was on a peninsula at Chester Creek. When the flood water came, the neighborhood disappeared.

Chester was already losing people, jobs and industry when the flood came.

The destruction of Eyre Park and the damage to the entire city became a case study of risky building in a flood plain and how a disaster affects a neighborhood and a city.

“I call it our Katrina,” said Stefan Roots. He was 10 when the flood hit, just after his father put down a deposit on an Eyre Park home.

Since the flood, it’s been a 50-year struggle to revive Chester’s economy.

That puzzles some, since Chester has so many assets– a riverfront, a railway, an international airport nearby, ready highway access and a major university.

“To see that our downtown hasn’t revived is really heartbreaking,” Roots said.

Read more at The Philadelphia Inquirer about the massive 1971 flood there.

Here’s a nostalgic look back at Chester, PA as it was in the 1940s.