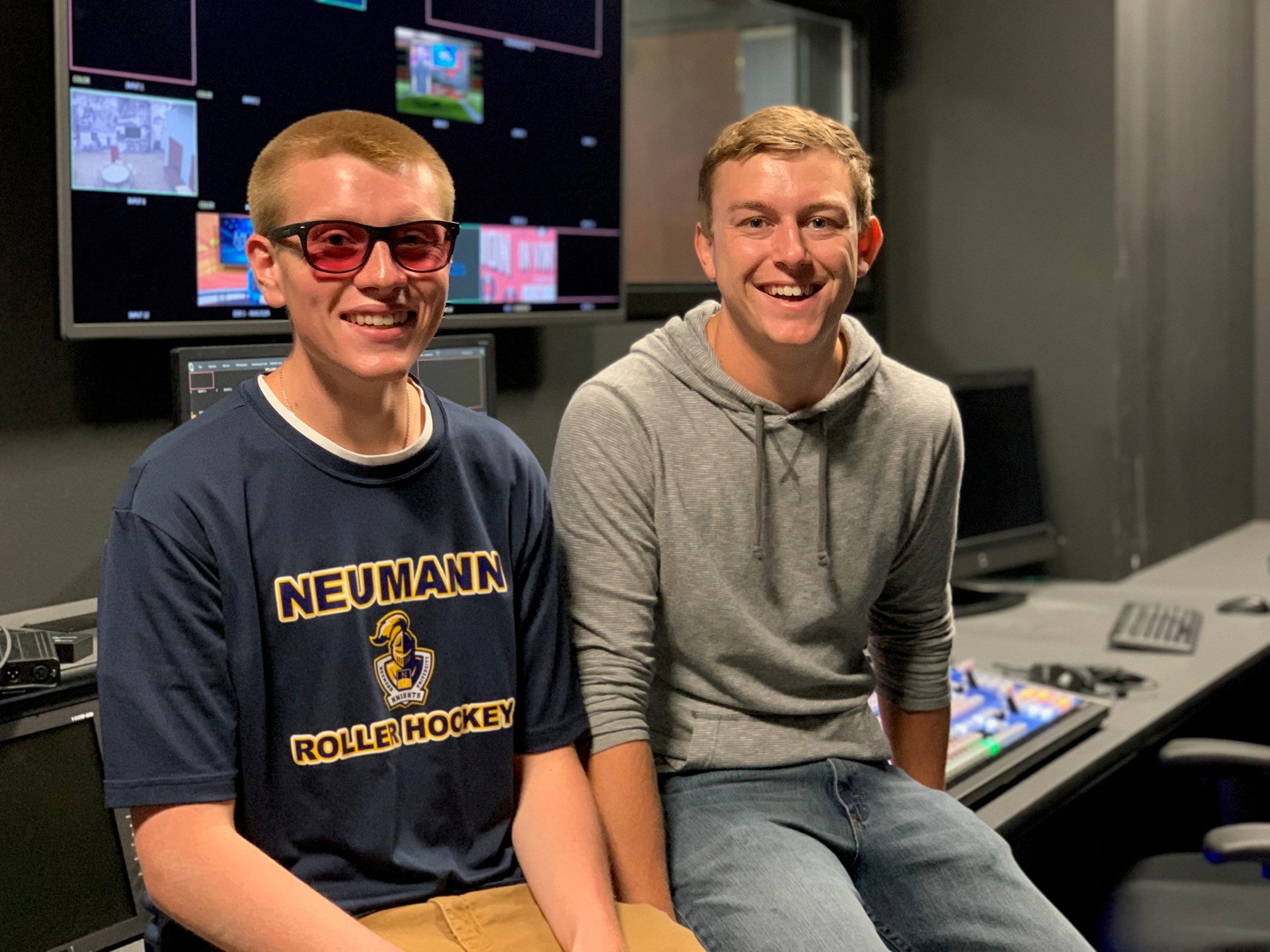 Image via Neumann University. Jake Loburak, wearing his colorblind glasses, and Sean Spence, who produced the video about his friend.

A simple act of kindness, captured on camera in December at Neumann University, has become the pivotal moment in a student-produced video that is now nominated for a national award.

“Jake Loburak: The Colorblind Videographer,” a 90-second video produced by communications and digital media (CDM) majors Sean Spence and Jake Loburak, is one of four finalists in the country for a College Broadcasters Best Feature News Reporting Award.

Loburak, a sophomore from Lansdale, was diagnosed with Strong Deutan Color Blindness as a young child. This type of color blindness makes red, yellow, green and brown appear similar, but his visual challenges have not stopped him from being a talented videographer on the Neumann Media production team.

“To me, it wasn’t a big difference in my life. Obviously, I would see things differently, but you just adapt to it,” he explained.

Spence, a senior from Lansdowne, became friends with Loburak through Neumann Media.

Curious to know more about his friend’s condition, Spence researched the affliction and learned about EnChroma Color Blind glasses, which look like regular sunglasses but enable people with color blindness to see colors. The Neumann Media club quickly decided that their friend had to have these glasses.

“As a staff, we collected money for the colorblind glasses. We all came together and pitched in. Even people not involved with Neumann Media donated,” said Spence.

Last December, Loburak was producing “Neumann Update,” a weekly university news show in the television studio. Unexpectedly, the anchors started to read a story about color blindness. They called him to the anchor desk and presented him with the glasses.

“I went up to the set and put them on. It was pretty cool,” Loburak explained. His actual on-camera reaction was to flash a smile and utter one word: “Whoa!”

Of course, this revelation was captured on video and became the key moment in the production about color blindness that was submitted for the national competition.

In addition to Loburak’s reaction to seeing colors, the video also illustrates the stark difference in how people with color blindness see everyday items, using rainbows and traffic lights to demonstrate the disparity. Red, yellow and green all appear as different shades of brown.

At the end of October, Loburak, Spence, and Neumann Media Director Sean McDonald will travel to St. Louis for the 2019 National Student Electronic Media Convention and attend the awards ceremony there.

“It’s good to get our stuff out there and to let others see that we’re doing good things here,” Spence said. “And now I’m a nationally recognized producer, which is pretty cool.”