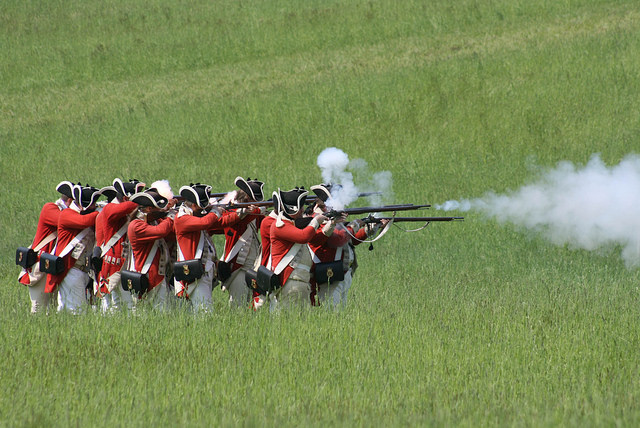 Publisher’s note: The terrorist attack on New York City and Washington DC in 2001 is one of four tragic American events to happen on September 11th.

In addition to the terrorist attack 18 years ago, the Battle of the Brandywine in Chadds Ford in 1777, the first death of the civil war in Christiana, 30 mile west of Media in 1851, and the 1857 massacre of 120 mostly Arkansas immigrants by Mormon settlers in Southern Utah, all took place on the eleventh day of the ninth month.

We asked noted local author Bruce Mowday, who spent six years researching the Battle of Brandywine, to provide a brief overview of what would be the largest land battle of the American Revolution, a skirmish that gave the British a major victory and forced General Washington and his 20,000 troops to retreat to Valley Forge.

During the early morning hours of September 11, 1777, more than 6,000 British troops under the commands of generals William Howe and Charles Cornwallis broke camp in Kennett Square and began a march that would take them to the undefended rear of General George Washington’s troops behind the east bank of the Brandywine River. A short time later another large British contingent under the command of General Wilhelm Knyphausen began driving the American troops before him to the Brandywine.

The British plan to ensnare Washington’s army behind the two British columns and smash the rebellion once and for all was moving forward as planned on that hot and humid morning. Fog masked the early march of Howe’s troops. If an American farmer happened to see the advancing British column, that farmer was taken into custody so he couldn’t warn Washington.

Washington picked the Brandywine as the best defensive position to protect Philadelphia, where the young nation’s government was headquartered. One of the goals of the British’s Philadelphia campaign was to capture the members of the Continental Congress and to rally those loyal to King George III.

The largest land battle of the American Revolution played out that day on the fields of Chester County. More than 25,000 soldiers took part in the conflict, doubling the size of the county’s population. Many significant figures in American history took part in the battle, including Washington, Colonel Alexander Hamilton, and future Supreme Court Justice John Marshall. Evidence indicates the battle was the first time the new American flag came under fire.

The day played out almost as Howe anticipated. His troops indeed surprised Washington. A local loyalist led the British past the right flank of Washington’s army by crossing two fords of the Brandywine. In the afternoon of September 11 Howe and Cornwallis lined their troops along Osborne Hill – near what is now Radley Run Country Club – and attacked Washington’s rear guard. The Americans were pushed from field, past Birmingham Meeting House to Sandy Hollow where the untrained Americans bravely stood toe-to-toe against the professional British army.

A Quaker youth, Joseph Townsend, was present that day and wrote down his thoughts as he witnessed what took place at Osborne Hill and the meeting house. Many described the attacking British force as a grand sight with all of the different colored uniforms and the British musicians playing as the advance began against Washington’s unorganized defense.

Brandywine was a major British victory and Howe did conquer Philadelphia but the British didn’t destroy Washington’s army and the Continental Congress fled to Lancaster and then York for the winter.

The most significant part of Brandywine is many times overlooked. Brandywine was the first battle for the young French General Lafayette. Lafayette didn’t have a command at Brandywine and he was distrusted by many members of Washington’s staff. A number of European political generals had sought fame and fortune fighting for America and failed.

When Howe’s flanking movement was detected, Lafayette rushed from Washington’s camp to the area near Birmingham Meetinghouse, near Sandy Hallow. As Lafayette attempted to rally the retreating American forces, he suffered a leg wound.  The young Frenchman shed his blood for the American cause of freedom and gained the respect of his fellow American soldiers on September 11, 1777.

Lafayette’s connection to the American cause helped to solidify France’s aid to the young nation and directly led to the defeat of the British. Brandywine and Lafayette played significant roles in the fight for independence.

Bruce E. Mowday spent six years researching and writing September 11, 1777: Brandywine’s Defeat at Brandywine Dooms Philadelphia. The book was the first major work on Brandywine and included research in London. He also authored the chapter on Brandywine and Germantown in the book Reporting the Revolutionary War: Before It Was History It Was News. This book was recently named one of the top 100 books ever written about the American Revolution.

Bruce is an award-winning author and newspaper reporter. He has authored more than 15 books on history, sports, business and true crime. Bruce has appeared on the Discovery ID channel, C-SPAN, the Pennsylvania Cable Network, Hollywood and Beyond, and Philadelphia and local television shows. He is a contributing editor with Business 2 Business magazine. Mowday has hosted his own radio shows and was chairman of the Chester County Historical Society and president of the Brandywine Battlefield Park Associates. He is a board member of the Valley Forge Park Alliance and the Chester County Conference and Visitors Bureau. He is a frequent speaker at various civic and historical groups.

For more information on Mowday, his books and his schedule of events, see www.mowday.com. For signed copies of his book contact him at mowday@mowday.com.)

What “Abbott Elementary” is Teaching People About Work

How to Become a Leader That People Respect

Wiser Wealth: How Much Can Your Children Save if You Teach Them to Start Now?