(PCIT) is a combination of play therapy and behavioral therapy for young children and their parents or caregivers. The adults learn and practice new skills and techniques for relating to children with emotional or behavior problems, language issues, developmental disabilities, or mental health disorders.

This intervention teaches specific skills they can use to help improve physical and verbal exchanges with their children.

PCIT has been shown to be effective for children who exhibit disruptive behavior or have experienced trauma, as well as those on the autism spectrum. PCIT and PCIT-based programs are also evidence-based interventions for preventing child abuse and neglect, and for decreasing the child’s risk of antisocial and criminal behavior later in life.

“There is a lot of redirecting to do, so it’s teaching the parent those therapy skills. Parents are also taught how to give praise so that the child knows what they did well and how to do it again,” said Jen Fremuth, who has been with Child Guidance Resource Centers since 2011. 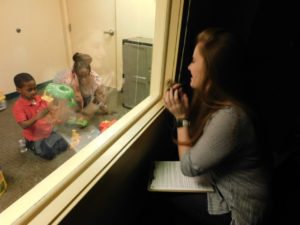 Families sit on one side of a one way mirror. The parent wears an earpiece while engaging in play with the child, Fremuth explained.  The therapist observes and coaches the parent on how to respond to the child through the parent’s earpiece.

PCIT teaches parents how to have fun with their child who has disruptive behaviors.

“It shows the child the parent is really engaged. A lot of parents have a hard time getting on the floor to play with their kids. By wearing the earpiece, they’re being coached on how to play with their child to connect with them,” Fremuth said.

If the parent begins to struggle, the therapist can instruct them on what to say without the child knowing the feedback is coming from the therapist rather than mom [caregiver].

“We’re also able to point out observations like how the child responded to the parent’s positive interactions that they might not have noticed otherwise.”

Geneva Dawson has been in the PCIT program with her child for more than six months. Megan Dinnel, a PCIT Therapist, has been working with Dawson and her son on strategies and techniques at Child Guidance Resource Centers’ Southwest Philadelphia facility.

Dawson entered the program because she was frustrated with trying to get her child to do things she was asking of him.

Within the first couple of weeks, they worked on house rules and how to ask things in simpler, gentler terms. Megan used the rule of “gentle hands”.

“When practiced consistently, these new skills and techniques can instill more confidence, reduce anger and aggression, and encourage better individual and interactive behavior in both parent and child,” she said.  “We’re supporting the parent in being the therapist instead of the kid forming that attachment with the therapist.  Once parents consistently follow through effectively, they are discharged from the program.”

Dawson said the therapy takes a lot of patience and parents have to be dedicated to it.

“Sometimes I think I don’t have enough time to practice at home but, in our travels on our way home, to school, and doing different things in the house, I’m able to use the time to get the things done. After a while, it just becomes natural for me,” she said.

“It takes a lot of patience, but you have to dedicate the time for your child to get well.”

The program is working for Dawson’s family and they are experiencing great improvement.  “He is emotionally growing. This program has helped my lifestyle and my child’s lifestyle,” Dawson said.

For more information about PCIT and other programs at Child Guidance Resource Centers, visit www.cgrc.org.